No mask can save you from my viruses - 8. @EurAfrics 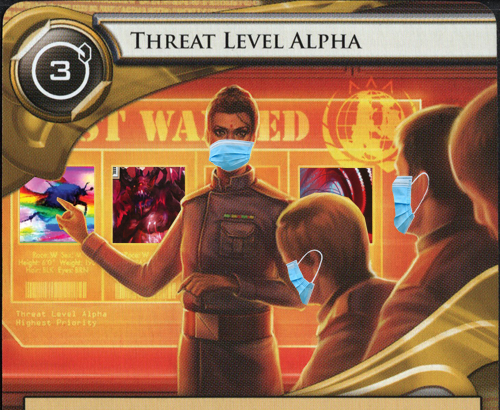 This is my homebrew Freedom trash-everything deck, that I took to the Europe-Africa-Continential Championship.

I did test around a bit before, but I'm still not sure, if it is already "perfected" in any way, and I'm quite sure it's not as strong as some of the current top-tier-decks like 419, Leela, Geist, Hayley or plain Good-Stuff-Anarch. I still liked the deck enough to take it to the Continentials for having fun and it went overall 5-4, with what I'm more than happy enough.

It even won me my 7.round - 241 against an Outfit-Deck and scared an asset-deck in the first round of the top-cut enough, to let me play my stronger corp-deck there.

The Deck definately has some very good matchups agaisnt all asset-spam-decks and pretty good against decks with low numbers of ICE and some very bad matchups against glacier-types of all kind. Sometimes you're just locked out with not much options, and it takes quite some time to build up your engine, but when you get it up and running it is a beast. It's often possible to just trash every ICE infront of HQ or (sometimes and) RND and just hammer away everything 4 times every round until they can't respond anymore.

All in all I really like playing it and it is a lot of fun, but I guess a regular good-stuff-anarch out of Freedom might be the overall-better = stronger deckchoice there :D