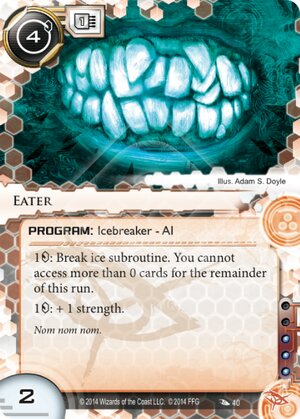 Interface → 1credit: Break 1 subroutine. You cannot access cards for the remainder of this run.

Eater is a Program that denies the main purpose of a run (to access cards) while strongly supporting its secondary purpose: to trigger conditional abilities or play conditional cards.

At 4 cost and 2 strength, this is the strongest AI in the game. In comparison:

Providing the cheapest way to make successful runs with a single breaker, Eater allows you to play some really powerful tricks. Think of any card that reads "whenever you make a successful run..." and/or "instead of accessing cards..." Here are a few examples:

First, it supports run events to trigger their ability. Go:

With Eater on the rig, we can play all this crazy stuff and punish the Corp badly. Ruin their credits, Trash a server (goodbye SanSan City Grid), Trash HQ etc...

With John Masanori, you are sure to make an extra draw each turn.

Works well with Silhouette: Stealth Operative has an ID to get a complete overview of the board.

Trash pieces of ICE. Yes, rip a server with:

Once the server is stark naked, go and access cards.

Having trashed assets, upgrades and pieces of ICE, you still need to score points. So why not then play Notoriety and Quest Completed ?

But by far the strongest interaction Eater allows is to make successful runs triggered by Keyhole. The latter bars you from accessing cards anyway. It is then possible to win a game only with Eater + Keyhole + Hades Shard.

From the moment you use Eater during a run, say goodbye to:

Eater is counterproductive with Edward Kim: Humanity's Hammer as an ID.

But mainly the bane of this card is Swordsman. If Eater gets popular - and I personally expect it to be - Swordsman might see a lot of play anew.

Looking forward to play this.

(All That Remains era)
Him 276
One thing eater really struggles with is Caprice Nesi as you still have to play the psi game and then can't trash her even if you win. — Pinkwarrior 26 Feb 2015
@Pinkwarrior just bet 0. Why do you have to win the psi game lmfao after destroying all ICEs, go get that fucker. If you let them score without ICE and a Caprice only, then it is not Eater's fault. Finally, Singularity the fuck out of that server if it pisses you off too much. — iceqs 3 Oct 2015
4

@paulxthompson that is correct. If it didn't have that, this card would be unplayable because you'd ideally want to be able to trigger cards like Keyhole, Singularity, Indexing, etc.. By having that wording it will allow for replacement effects.

The text on the card is fairly clear. It looks to be worded very intentionally for the purpose of working with run effects. "Instead of accessing cards" has no prejudice toward the amount of cards accessed, be it 20 or 0. Access isn't prevented, but rather the number of cards accessed is limited.

I'd eat my collection of Sharkeisha figurines if this doesn't work the way it looks designed to.

You're absolutely entitled to wait for confirmation, but I'll be accepting any and all offered hugs.

@Hlm's review is just great, except for this:

"From the moment you use Eater during a run, say goodbye to Medium and Nerve Agent".

Medium/Nerve Agent are great with Eater: use Eater to Knife/Fork/Spoon ice out of the way, while you get virus counters on your digging virus, before running free from that nasty ice.

Eater seems to be the run event's best AI breaker to date (when it comes out). Aside from Swordsman, I reckon Crisium Grid's utility will jump up the scales as well.

What's great is that even if Crisium Grid is a hard counter for run events, it doesn't stop the "utensils" from ripping a server open for a succeeding run. Imp or straight out pay-to-trash solves what may be a temporary delay.

Still unconfirmed if it'll work with Siphon and co.

"In fact, Eater would be an overpowering addition to the game were it not for its single drawback: When you use Eater to break an ice subroutine, you cannot access cards for the remainder of your run."

This extract is from last news entry on FFG website. Let's wait for some ruling from Lukas before all the hugs ;)

"more than 0 cards" is odd wording - different to "cannot access cards" - I'm guessing that this is to imply that you can still do the "instead of" action on a run event, making this an excellent companion to Account Siphons and the like?

(All That Remains era)
paulxthompson 235
1

Old news now I'm sure, but hasn't been mentioned here so for the benefit of people who are not already veterans of the game (like me), Eater is a killer way to line up Apocalypse. Get into servers easy, don't access anything, sure, but bang! Post rotation, and given the loss of e3 Feedback Implants, it feels like a safe way to control the board with Apex: Invasive Predator (who has taken a hit form rotating cards), but also a viable strategy in an Anarch deck that looks to dispose of ICE is you can set up an early Eater, hold back on other rig assets and then Apocalypse after the corp has iced his servers, before setting up a more traditional Knifed, Forked, Spooned combo for mopping up his later ice drops.