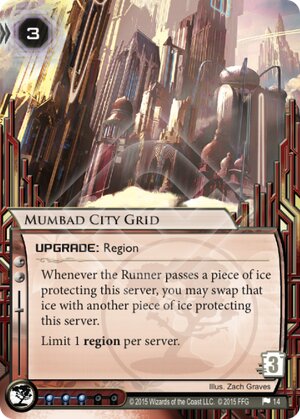 Riddle me this: when is a Quandary not a Quandary?

The answer is, "when it's the same goddamn Tollbooth that you've had to hit three times to get into this blasted server because of Mumbad City Grid."

Let's be very clear about what happens when you have Mumbad City Grid on a server:

That's just cruel. Just pure meanness. A triple-Tollbooth server is the closest thing to impenetrable the game currently has, and you don't even need to rez more than one. A triple-Komainu can easily get up to 10+ subroutines before they make it in--remember, it's the same piece of ICE being encountered again during the same run. Quicksand accumulates counters at triple the normal rate.

Of course, if the runner breaks the Tollbooth once and jacks out, you now have the Tollbooth as the middle piece of ice; then, the next time they run the server, they only have to deal with Tollbooth twice (plus the chump piece of ice on the outside). Unless, of course, you happen to be running Tenma Line, a criminally undervalued card.

Mumbad City Grid is the first piece towards a new kind of Jinteki glacier; when the economic ID of Pālanā Foods comes out in the next pack, we might see a rival a to the legacy of Replicating Perfection arrive in the meta.

(Kala Ghoda era)
tiedyedvortex 4606
This could find a home in an IG deck, on a central bouncing Quicksand for increased tax. Or Komainu for hilarity. Even with a Mimic out, that's a ridiculous tax. It does make me wonder how something like Femme works with this - you're Femme'ing the rezzed ICE, not the position it's in. I would think that were you to move a Femme'd ICE that was just bypassed, they could Femme it again. — GrantZilla1979 2 Feb 2016
Grail! — toiry 4 Feb 2016
What is the rez window for Mumbai City Grid here? Can you rez after the runner breaks the final sub on the first ICE, and then force them to re-encounter? — fetish 9 Feb 2016
The rez window is the same as Caprice Nisei (and usually Markus Batty) - it must be rezzed in the ICE approach rez window, because the next rez window is after the ice has been passed. Also, this would be fun in Blue Sun. When they jack out, you just bounce the ice and put it back in front. The ultimate glacier. The influence is a bit brutal, but that's what Project Atlas tokens are for, right? — EnderA 9 Feb 2016
It can, IIRC, also work with the Twins, but the twins need to fir first, the Mumbad City Grid - hit Tollbooth 5 ti — CactusJack 12 Feb 2016
So with Komainu you would have lets say 5 subs the first time, but would have 10 the second because the original 5 are for the remainder of the run and you encounter it again, adding 5 more subs? — hutch9514 24 Mar 2016
In a vein with the Komainu comment, can I assume that any advancement counters on a piece of ice would move with it? Ice/Fire walls? — Catsodomy 6 Jun 2016
7

When I first saw this card, I saw potential, I saw a deck, one that I wanted to build and I wanted to play.

I'd tried to make a Mumbad City Grid Grail Ice Deck before it was even released, I've been trying until I started writing this. Sure there have been plenty of games where this has turned a server with little more than a Galahad and two junk ice into a 15 subroutine unbreakable monstrosity, and given a Komainu more subroutines than the runner had cards left in their deck.

But it was too slow, Parasites and Cutlery were running rampant. The ice I needed for that beautiful remote server was needed to seal the holes that kept forming over R&D, achieving the installation of the 3+ ice needed to make the remote was nigh on impossible.

Just as I was starting to feel that the deck was tuned well enough to be able to cope with it, and as Dumblefork took a huge hit from the new most wanted list...

A card that is far easier to satisfy, has a much more potent effect, renders parasites little more than a tickle, and costs nothing to rez was released.

Sandburg essentially does everything this ever wanted to do, only far more easily, and far more effectively.

My deck has run faster and more effective since I tore out it's still beating heart, and replaced it with cold, hard, unloving cash.

But it's not the deck I wanted to build...

It's not the deck I wanted to play...

It's not my deck anymore...

Mumbad City Grid was never quite fast enough to properly reach it's potential, and now... it probably never will be.

(23 Seconds era)
Quarg 250
Rumor Mill gets Sandburg but not this card. Rumor mill will prob be pretty popular. Your card's time will come. — Waltzard 31 Jul 2016
You are correct, though it still does not solve the problem of how slow it is to set up, since the meta-game has been full of fast decks, and hasn't shown any sign of slowing down since before I started playing properly nearly two years ago, and Rumour Mill looks like it will destroy most glacier decks for the forseeable future, Jinteki especially, with their reliance on Caprice and Batty. I will admit that this review is a major overreaction, but regardless the truth is that it was consistently too slow to set up, and Hayley and Geist decks have significantly more inevitability than this provides. — Quarg 1 Aug 2016