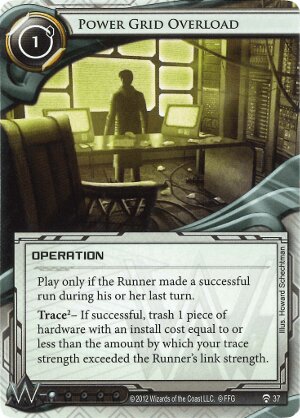 Play only if the Runner made a successful run during his or her last turn.

Trace [2]– If successful, trash 1 piece of hardware with an install cost equal to or less than the amount by which your trace strength exceeded the Runner's link strength.

I've never seen this card played and I can't understand why. Apart from the obvious combo of blowing up a plascrete and scorched earth a runner who thinks they are safe, it is also great at blowing up consoles, clone chips (MaxX hates this BTW) and other annoying hardware. It is played best in NBN making news IMO and at one influence pip is easily splashable.