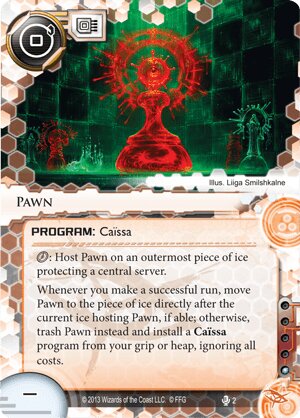 click: Host this program on the outermost piece of ice protecting a central server.

Whenever you make a successful run while this program is hosted on a piece of ice, move it to the next inward piece of ice, if able. If you cannot, trash this program and install 1 other Caïssa program from your grip or heap, ignoring all costs.

According to the FAQ 2.2, Pawn Should read: “Whenever you make a successful run while Pawn is hosted on a piece of ice, move Pawn to the piece of ice directly after the current ice hosting Pawn, if able..."

(The Universe of Tomorrow era)
algorithm 108
Surely that's implied by the "after the current ice hosting Pawn" bit? — lolpaca 16 Oct 2015
A straightforward (but obviously unintended) interpretation is that an unhosted Pawn fails the 'if able' check and pops a new Caïssa. — Toper 16 Oct 2015
I'm confused, why does faq version 2.2 call for this distinction? Pawn was already able to be hosted on other cards (scher) and then moved onto ice. The new faq changes the rules for other Caissa, but not pawn. If anything, the extra text you mention should have been on the card since it was introduced. — MrAaronSA 17 Oct 2015
What difference does it make which piece of ice Pawn is hosted on? The only benefit I can see is that it helps get other Caissa programs installed after a successful run. Can someone provide a review that describes how the strategy this card facilitates actually works? — chris_walker 9 Nov 2015

I'm responding to a 7-year-old comment here, but what the heck. The issue with the card as written, if I understand it, was that when you installed Pawn, it was unhosted. Because the "successful run" trigger as written didn't require Pawn to be hosted on a piece of ice, the ability would still trigger if Pawn was unhosted. You wouldn't be able to move Pawn to the next innermost ice, so the "if you cannot" part of the trigger would fire. You'd get the Cäissa fetch as if you'd marched Pawn all the way through your opponent's ice, but without doing the hard work. I assume the idea was your Pawn could be "promoted" to another Cäissa after reaching your opponent's side of the board (evoking pawns in chess), but the ability as written allowed you to bypass that entirely by never hosting Pawn.