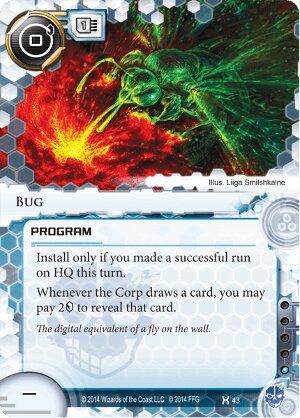 Install only if you made a successful run on HQ this turn.

Whenever the Corp draws a card, you may pay 2credit to reveal that card.

The digital equivalent of a fly on the wall.
Illustrated by Liiga Smilshkalne
Decklists with this card

Once upon a time, this card suffered from 46th card syndrome. Running aggressively was the preferred criminal style, and this card certainly didn't help that play style. However, this card now may come back with a fiery vengeance with the release of the Janktastic Laramy Fisk. Think about it: Criminals have been strong at knowing what the corp is up to. Between this and Fisk's ability, it's very easy to flood the corp's hand AND know what's in it for a measly 2 creds a draw. The criminal archetype that was meant to be might be of use after all.

(The Universe of Tomorrow era)
skyrunner36 95
I agree that Fisk makes Bug a better option that it was before, but 2 credits a card is hardly "measly" if you want to have a complete knowledge of the corp's hand. It's also irritating that it uses up memory. — tiedyedvortex 3 Sep 2015
It's too expensive to use regularly. Oh wait, Multithreader exists. — FarCryFromHuman 3 Sep 2015
The big reason I see for Bug to be used is to figure out when to flood the corp with other effects like Eden Shard, Fisk Investment Seminar and other forced draw abilities. The goal would be to let you time out when and how you want to make your Legwork/Archives runs. Here's the problem. Most other cards that let you plan out your runs this way get cut all the time by better players who see these cues in a players play without the need of help form an in game program. For example a good player knows when to Legwork NEH based on board state and credit totals, not because of reveal effects. I'm guessing good Laramy Fisk players will soon find out how to maximize their pressure, and this card will fall back into obscurity rather quickly. — Kronosdev 3 Sep 2015
It's just awful. I'd love to be wrong but... no. There's no way to justify commiting so many resources to limited information. Multithreader is throwing good money after bad here. — Greasythumb 4 Sep 2015