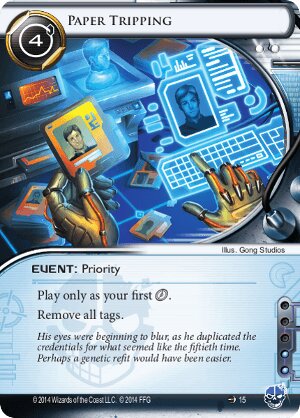 His eyes were beginning to blur, as he duplicated the credentials for what seemed like the fiftieth time. Perhaps a genetic refit would have been easier.
Illustrated by Gong Studios
Decklists with this card

Cards, like Paper Tripping, are released, and we all sit back and scratch our heads.

Then, two cycles later, a big box drops, with LOADS of tagging in it.

This seems like a really good include in a post-Data & Destiny world, because you WILL be tagged, and you will HATE how hard it is to remove them.

(Old Hollywood era)
pizzarony 58
The problem with this card is that 2 influence for a silver bullet tag removal utility, even as a one of, is still really expensive out of faction considering the tight deck space and influence right now. There are more and more of these cards coming out like Clot and Film Critic that if you want the answer to every top tier weapon you won't have any influence left. I think other cards will likely take priority over Paper Tripping, even with all the tagging on the way. Plus, being limited to your first click really sucks. — WayneMcPain 18 Aug 2015
4

Recently played against a 24/7 Convenience Shop Kill deck in a store tournament. Wished I didn't cut this gem from my Criminal deck. Got 18 tags and couldn't find my two Plascrete Carapace in time. Settled for second place.

(Data and Destiny era)
PanzerD 9
You know what would have been better than this? A third plascrete. — BoomFrog 11 Feb 2016
1

1) Troll the Corp if you survived a brutal Midseasons.

Don't think there's much else to say about this card, other than that I haven't seen it used.

(Chrome City era)
LynxMegaCorp 1336
If you really want a card to deal with #2, you'd probably prefer to use Lawyer Up. This card is pretty expensive for what it does; how often do you have 3+ tags on you? — KitsuAeryn 25 Jun 2015
Also if you willingly siphon and then let the turn end with two or more tags on you with plans to paper trip them all away the damage is already done. — Kronosdev 18 Aug 2015