Once per turn, break 1 barrier subroutine.

"Why should we be slaves to our genetic heritage?"
Anarch • Matt Zeilinger • First Contact 52
All sets:
Links: Decklists | ANCUR 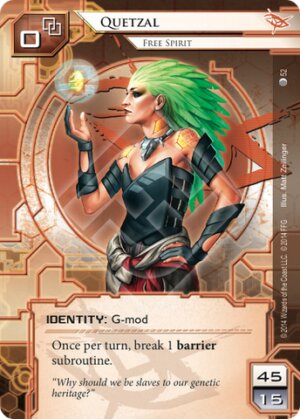 At first I thought her ability was lacklustre, but I was so very wrong.

This ability will warp the way your opponents play their ice, as almost all early barriers are now useless. The only barriers with a rez cost of 5 or less that she doesn't simply walk through are Hive and Eli. (Situationally, she may also be caught by NEXT Silver and Galahad.) But for the main, your opponent loses the use of 1/3 of their ice in the early game. This allows you to get rolling that much quicker.

An additional point in her favour is her synergy with the AI breakers; traditionally Wraparound is the favoured way to stop them, so any AI deck will run an inti or corroder to avoid the pump. Quetzal has no need.

And of course, there is the obvious synergy with things like e3 feedback implants and grappling hook, which can reduce even barriers like Wotan and Hadrian's Wall to minor speedbumps.

All in all, I think she will provide an intersting new aspect to Anarch.

(Up and Over era)
Jashay 698
A most recent addition to Quetzal is Knifed from Order and Chaos. Watch those Elis burn... Then again, it could be argued that there is no need for Knifed for barriers are a trifle for her anyways. Getting through multiple barriers per turn is problematic though, and getting rid of some will most likely be worth it. — Crauseon 6 Mar 2015
4

After running this ID from the Moment it was a text spoiler, I can Honestly say I have never played a... Stranger runner or had more fun building (and Theorizing) about an ID

For a while this one was quite the "Enigma" many peoples original thoughts one her were, not so great "Why is this card in the faction with the best barrier breaker", "only one Barrier SUB per turn you might as well be running Reina Roja, at least you get some link", "I think Wizard is no longer the worst runner in the game" I could go on in this Vein but you get the Picture....

It took a load of time and effort on many players parts (Lots of Red Herrings like Grappling hook and Paintbrush were fallen for, myself included) but we got their, we made and actual working model for her that Kicked ass, especially when Blue Sun was released (Anarchs lost a lot of toys to that) but alot of Barriers are in the Weyland faction so she was a good counter attack.

But she was still missing something, she was suffering from all the usual Anarch Issues; Inconsistency, no Native draw or search cards, Yog couldn't get past Lotus field, Scrubbed Turned D4v1d off ect ect.

And then Order and Chaos hit, and she just "Flew" Data Folding, Knifed, Steelskin, Wanton Destruction. they made her great (She even won some Store Championships).

But Enough Back story, onto a review. Her Ability has the similar effect as Kit, it basically makes the Opponents barriers useless early game, playing against her is a totally different game, She can walk through you Eli's for one Click and her Ability, she can even get by bigger ice like hive if you have an E3 down, making her very strong early game and a very aggressive runner. Because of this Corporate players will want to double stack barriers, making their ice Arrangements very predicable (Which is great in a hidden information game). Possibly my Favorite thing about her is the fact she can burn an early Oversighted Curtain wall for only two Credits if you have E3 down.

Overall I think Quetzal is the best Runner card released in the Lunar cycle, and a lot of fun to play, if any of you are having or ever have a runner Identity Crisis, look no further than this "Bird", she rocks harder than MaxX and can only get better as we get further into the game.

Lets add some newer comment to the (old and excellent) reviews. First ; Quetzal is very peculiar.

Not just her appearance. Her ability is downright amazing. But, unlike Kit, it can sometime be competely useless. Quetzal ability let you run through a lot of barrier without inconvenience. If you use criminal tools with Quetzal, like Boomerang, Barrier will never be a problem.

The thing is, with Paperclip, barrier are seldom a problem. With Quetzal, it is probably better to use Corroder (2 cred cheaper) and save a cred on breaking barrier by using Quetzal ability. For certain ices, like Sandstone, Vanilla, Static Wall, Rainbow and other, Quetzal will let you pass the ice for free! Major saves.

But certain corps use more sentry and code gate. There, Quetzal become useless.

Which is why Quetzal is often hosted on DJ Fenris, to get a cheap breaker for barrier, that work once a turn.

Finally, Quetzal is most colorful ID out there. In all variation, she has this quality that fascinate the eye.