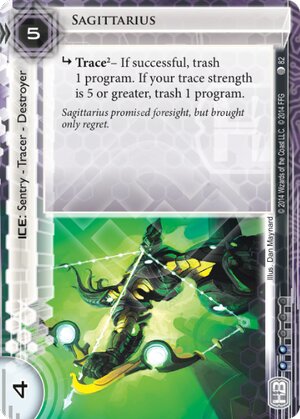 Sagittarius promised foresight, but brought only regret.
Illustrated by Dan Maynard
Decklists with this card

This is another mid-cost program-trashing ICE. It is good for the corp to have a variety of these available (even if only one is in your deck), because it is more likely the runner will play around the wrong one.

You should expect to pay 8 for Sagittarius on the first rez if you want to hit a program. It looks weak at taxing since it is just trace 2, but remember that the runner cannot afford to just run through it and pay the trace, since at any point you can decide to boost the trace to 5. Note that the whole cycle of these tracing ICE synergize well with Making News and Primary Transmission Dish, since it's easier to boost to 5 repeatedly.

That said, it is still probably weaker than Ichi 1.0 in taxing decks, since Ichi taxes icebreakers harder, and if the runner is using 2 clicks to get by Ichi the glacier deck is happy. I don't see current decks making room for this.