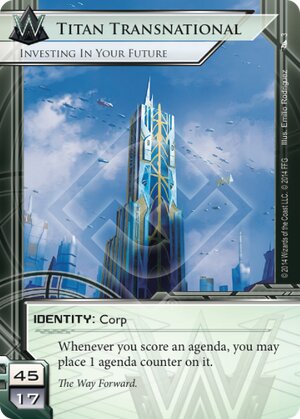 Titan Transnational: Investing In Your Future

Whenever you score an agenda, you may place 1 agenda counter on it.

The Way Forward.
Illustrated by Emilio Rodriguez
Decklists with this card

Titan Transnational is shaping up to be a high-tier ID, specially combined with the upcoming asset "Mark Yale".

Aside from the obvious advantage of 17 influence (which in influence-tight corp lists is particularly useful), let's take a look at what tricks Titan has up its sleeve, in the current card pool:

It's important to note that even agendas that don't involve agenda counters at all, also get an agenda counter. This wouldn't mean anything if it wasn't because of Titan Transnational's de-facto director, Mark Yale (I'm not sure yet if there's a lore connection, but the mechanics are so connected that I'm almost sure). With him in the deck, every agenda score means an extra 3 credits, and multi-counter agendas like Firmware Updates will quickly drown you in piles of cash.

This, in my opinion, is the strongest Weyland ID, sharing the top spot with Blue Sun, but ultimately ahead thanks to the incredible interaction with Mark Yale. It's a good day for Weyland!

One more agenda you can use with Titan is Executive Retreat. Doesn't hurt to have an extra Draw 5 Cards ability. Wouldn't be in my suite personally, but if you wanted to have minimal agenda density it could be good.

Am I interpreting this ability correctly? This would make Project Beale a 3/3 and Market Research a 3/4 for Corp and only worth 2 for the Runner. That seems valuable, but I have not seen these agendas in Titan decks so thinking I'm wrong... or that the other counter agendas add more value than the extra agenda points.

(Order and Chaos era)
sgram 13
Sigh you can't play NBN agendas in Weyland :/ — Kroen 15 Feb 2015
Ahh, ok. I've played three times. Missed that one. Thought agendas could be played in any faction. Thanks! — sgram 15 Feb 2015
Can you imagine an extra agenda counter on astroscript? :P — trafalco 15 Feb 2015
besides kroen's point (it being the most important here) the agenda counters don't by default increase the amount of agenda points they are worth when scored — zithith 15 Feb 2015
No, the agenda counters absolutely increase the worth, regardless of how they get there. — structuremole 16 Feb 2015
An agenda counter is not an agenda point. It's a counter for use usually for a paid ability on an agenda card, such as Firmware Upgrades. — rezwits 16 Feb 2015
rezwits is correct. The worth of the agenda does not increase. What this ID does is load extra counters onto agendas. Some example agendas include Project Atlas, Geothermal Fracking, High Risk Investment, and Firmware Updates. — Kronosdev 16 Feb 2015
If the counters are all upside (as of yet, they are) then it's always helpful to have more than fewer. What the counters do depends entirely on what the cards you have in play say they do. — Raiddinn 16 May 2016