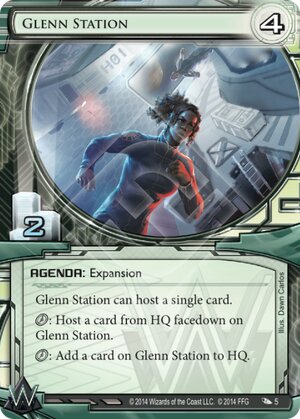 click: Host a card from HQ facedown on Glenn Station.

click: Add a card on Glenn Station to HQ.

Illustrated by Dawn Carlos
Decklists with this card

Let us all take a moment of silence to acknowledge the very brief time that saw Glenn Station become the best agenda in Weyland's fiery arsenal. For those unaware, Lukas initially issued a confusing ruling that basically allowed the Corp to install an agenda on Film Critic, and even advance and score it. This led to the idea that the Corp could do the same with Glenn Station (GS). Fast Track into a scored GS as soon as possible, stash a Government Takeover on it, then sit back and score it while it's beyond the reach of any runner without Turntable (which would be hilarious). The ruling was reversed, and it's better for the game overall that it was, but for a brief, glorious time, Weyland's relevance was over 9,000.

That being said, this card could still see use in a kill deck with Government Takeover. Score it, host the Takeover, then attempt to set up the kill while a chunk of your agenda density is lost in space. Again, Turntable would be hilariously sad, but I suppose it would be just desserts for you, since the alternative was double Scorched.