When you install Street Peddler, host the top 3 cards of your stack facedown on Street Peddler (you may look at these cards at any time). 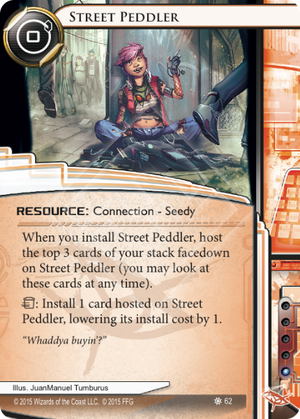 I can see Peddler in four different decks at the moment:

1) Noise - being able to play Parasite mid-run without Clone Chip is fantastic, especially thanks to the surprise factor. Street Peddler allows this with any virus, really, and combined with Noise's ability seems to put a little pressure on all servers (could she be offering a Medium or Nerve Agent?)

2) Hayley Kaplan - Street Peddler does two things for Hayley: allows her to install another Resource on the same turn, then on a future turn install something else. Can't get any better for synergy out of faction if you ask me!

3) New Criminal ID - The one that draws 1 card the first time they use a ability each turn.

4) Connection-oriented decks that use Calling in Favors. That card seems to get better and better with each data pack!

(Order and Chaos era)
LynxMegaCorp 1335
The new criminal ID draws a card *every* time they use a trash ability. It isn't limited to once per turn (and good thing too, because even as it is it's pretty janky and even less tier-y than Exile, which also isn't limited to once per turn btw. Not that I'm not excited for the new criminal ID, quite the contrary; I love me so junk IDs). — Kroen 3 Mar 2015
Scratch that, I just double-checked and it IS indeed only the first time. Damn. Now it's the jankiest ID in the game. I really hope they got the spoiler wrong, because even if not limited it's still janky. — Kroen 3 Mar 2015
Uhh.. http://netrunnerdb.com/en/card/08063 Whenever you use a trash ability, draw 1 card. — StashAugustine 9 Jul 2015
Yeah this thing is basically Geist Diesel. Draw your choice of three cards, draw a card from trashing the Peddler, draw a card from trashing whatever was on the Peddler...good times. — LordRandomness 1 Feb 2016
Giest and peddler don't work like that. At all. — Baitdoll 22 Apr 2016
Care to explain why? You install Peddler for 0, looking at top 3 cards. You install something like Spy Camera from the Peddler by trashing it: You have now drawn the Spy Camera (from Peddler's ability) and one other card (from trashing Peddler, due to Geist's ability). You then trash the Spy Camera, activating it and drawing a third card (from Geist's ability again). The net result of this is that for the click cost of the Peddler you have drawn two cards and played and used a Spy Camera (net gain: three cards). Now, what part of this doesn't work? — LordRandomness 8 Jun 2016
15

Damn cool! I can install without paying the click and reducing the cost of the thing, not bad. And The corp will no know what I want to do until 'll do it. The only weakness is the fact we could find events and be constrict to trash them too, but still a great card!

(Order and Chaos era)
SlayerCNV 249
Sounds like the kind of card you want in a Noise deck where your only event is Déjà Vu. Get a cheaper virus install for a paid ability, and potentially toss programs into your Heap for later recursion :) — PaxCecilia 3 Mar 2015
Indeed you don't spare a click, because it is spent to play... Street Peddler. — Him 3 Mar 2015
5

I have no idea why Fantasy Flight continues to print utter trash cards such as this one. Let's compare to a Diesel: Diesel lets you draw 3 cards, no questions asked. This card lets you look at the top three cards of your deck and maybe install one of them at a discount of 1. It trashes all those good events you painstakingly included in your deck. If, for some reason you put this card in your deck, if you are ever tempted to install it, don't, and just click for a credit instead.

(The Underway era)
ZenCadenza 88
Are you trolling? Lol, there are plenty of low-event runners that could use some surprise mid-run installations, and before you mention savior-faire or SMC, Street Peddler allows hardware and resources as well. As far as being anarch, installing exactly what you need exactly when you need it is generally how they play. — Riconosuave 28 Jul 2015
Anyone reading these troll reviews, please upvote the other, genuine reviews for these cards, to help bury the troll reviews. — Ber 29 Jul 2015
I think he just didn't understand this card's potential. I didn't when it first came out. The biggest benefit of Peddler (imo) is that it gives anarch an instant threat (breaker, Temujin, last second Medium, whatever!) — Nathan 0 10 Mar 2017