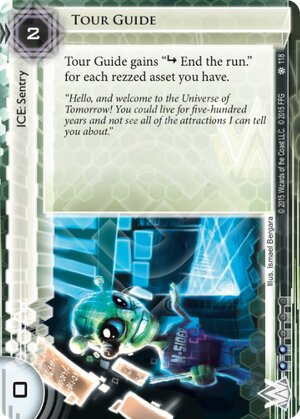 Tour Guide gains "subroutine End the run." for each rezzed asset you have.

"Hello, and welcome to the Universe of Tomorrow! You could live for five-hundred years and not see all of the attractions I can tell you about."
Illustrated by Ismael Bergara
Decklists with this card

Worst case scenario, this gets immediately parasited and it's the sentry equivalent of an Ice Wall or Quandary. 2 credits really isn't that bad, and you end up breaking even with the runner which is pretty good for a piece of ICE anyway.

Best case, this could have a ludicrous amount of subs that makes breaking it repeatedly a massive tax. For example, Gagarin or Industrial Genomics. You don't want to access/trash all their assets, but not doing so is going to make them money and make this a massive obstacle.

You could click for credits for five-hundred years and not have enough to pay all my subs.

(The Universe of Tomorrow era)
Chuftbot 819
I see, time to go back to switchblade Andy — toiry 6 Sep 2015
Or just use Sunny's breaker and giggle to yourself. — Teslacoil55 6 Sep 2015
Surely the worst case scenario is having no rezzed assets? But I'm looking at it as a tax; if I have just two rezzed assets, there is no breaker that breaks it for less than its rez cost, except Faerie. It's like an ETR version of Pup — Jashay 6 Sep 2015
switchblade? — GammaCodeX 6 Sep 2015
1

This card would actually be pretty decent for decks that build horizontally if it isn't for that one strength... I would love to have it as part of my Industrial Genomics deck where rez'ed assets are near untrashable... Too bad it dies instantly to Parasite

(The Universe of Tomorrow era)
MizuRyuu 2
As long as it's the first ICE on a server it still breaks even with Parasite. 2 creds and 2 influence if out of faction. If not, it's an ETR sentry, which is great for a ton of builds. — FarCryFromHuman 4 Sep 2015
1

Play in an extremely horizontal deck with Chief Slee.

I guess actually pulling it off would be difficult but imagine doing 10 meat damage in a single turn. Or better yet, go superjank, 20 remotes and 15 meat. :D