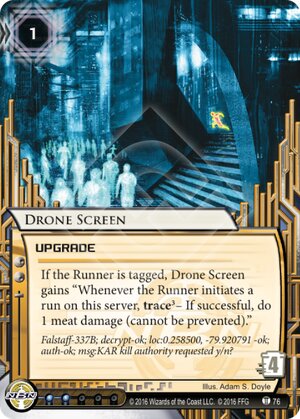 If the Runner is tagged, Drone Screen gains "Whenever the Runner initiates a run on this server, Trace[3]. If successful, do 1 meat damage (cannot be prevented)."

Dedicated Response Team as an NBN upgrade, so how does it compare?

... And I was really scraping the bottom of the barrel with some of those pros; so it should be painfully clear that Drone Screen is nigh undeniably worse than Dedicated Response Team, which wasn't a great card to begin with. At least DRT enabled some funny surprise flatlines, whereas Drone Screen will be quite unsurprisingly useless.