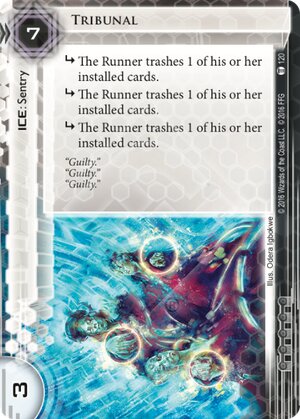 "After careful consideration, we of the jury find the defendant, Mimic: Not Guilty!"

"I hereby award the defendant his counter-suit of all 7 credits used in legal defense in full, to be paid by the prosecution." - Zealous Judge

(Quorum era)
jdietz43 30
Did they forget about Mimic when they thought this up? — Restorationist 30 Jan 2017
I think this is like the tales of what Monolith once was... at one point this was way overpowered and the playtesters said, "Either drop the strength from 5 to 3, raise the rez cost from 4 to 7, or let the runner choose the card," and they did all three. — Goldstep 12 Feb 2017
4

Apparently FFG doesn't believe in the old adage of "always end with a bang" because this is a candidate for "deck I build for my archnemesis to play".

Those three "guilty"'s in the flavor text:

Really, the only thing that's not too underpowered on this card is the influence cost. And I'm not even sure of that. If you gain 1 influence for slotting this card it would probably still be a waste of slots.