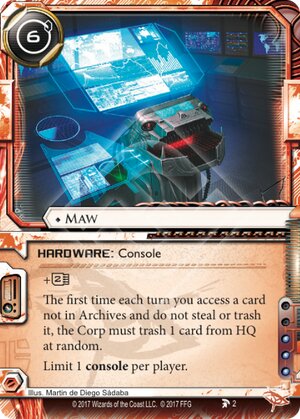 The first time each turn you access a card not in Archives and do not steal or trash it, the Corp must trash 1 card from HQ at random.

Illustrated by Martin de Diego Sádaba
Decklists with this card

Look at that! 3 influence for a powerful console. What a novel idea!!!

And because my review must be longer: Combine with Salsette Slums when accessing assets and upgrades (or trash-able ICE and Operations) to still get the effect.

(Daedalus Complex era)
quailman2101 274
Seems like the combo with Salsette Slums doesn't work: http://ancur.wikia.com/wiki/Daedalus_Complex_UFAQ — manicmoleman 26 Feb 2017
That makes no sense. Salsette Slums prevents Hostile Infrastructure from triggering because you aren't trashing the card anymore, so how would it count as trashing the card for Maw? — Lykosidae 26 Feb 2017
Yeah, that's weird. Seems clear that Salsette should work with Maw. — quailman2101 26 Feb 2017
Alice Merchant's console - look at her, look at the synergy! O_O — H0tl1ne 26 Feb 2017
Whoops, the card has to be not in Archives. No synergy here, carry on. — H0tl1ne 26 Feb 2017
Unless they happen to have an Upgrade on Archives! But that almost never happens. — quailman2101 26 Feb 2017
I think the issue with slums is that you pay the trash cost, but the card is not actually trashed, it is removed from game. Hence why CtM does not trigger. There is some semantic difference between "paying the trash cost" and "trash"ing a card. As to potential synergy with Alice, I think there is some, if you run Archives, the corp tosses something they can lose, then you trigger Maw on a different run, making the random factor more likely to hit a card the corp would like to keep. Just thoughts. — lp87 27 Feb 2017
So after reading all the arguments over Ordinal triggers and like, it looks like the Salsette Slums interaction doesn't work, since the game 'remembers' that you tried to trash a card in 4.5.3. However, I think this makes the card play very differently to how it's actually written, and should have been cleaned up. At least it's not as messed up as Sync BRE. — Lykosidae 27 Feb 2017
I'd say "Pair with Archives Interface..." casue that means that they can't get back what they trash as easily. — Goldstep 28 Feb 2017
Is this absolutely confirmed? To me, there isn't even a question that Salsette should work with Maw. But if it doesn't work, I'd like to know for sure. — quailman2101 10 Mar 2017
It makes no sense for Maw to not trigger on Salsette. With Salsette “Once per turn, when you pay the trash cost of an accessed card, remove that card from the game instead of trashing it.” ANCUR is claiming that the runner must ‘trash the accessed card. But they don’t, they PAY the trash cost to remove it INSTEAD of trashing it. Maw fires. — Evernothing 17 Mar 2017
If the ruling is correct that Slums & Maw don't work together, then FF has really screwed up with the wording on this card. It's ridiculous that players should have to know that there's a difference between "choosing to pay the trash cost" and "the card actually goes to archives", and they happen at different times, but both are referred to as "trashing". — GrumbleBee 20 Mar 2017
Thank goodness, they fixed this in the latest FAQ, so Slums and Maw do work together now. — Toper 17 Oct 2017

Maw + Bhagat = Millmonster of epic proportions. Successfully run HQ, Bhagat triggers and trashed the top card of R+D, if you don't hit and agenda or trash from the HQ acess, Maw triggers and trashes one random card from HQ. So it's essentially two acesses if you hit an agenda in Hq, or three if you don't. (Yes, I'm aware you'd have to run archives to access the trashed cards, but still. Drop an early Hades shard and do your thing player!)