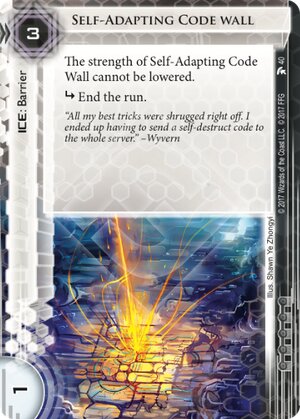 The strength of Self-Adapting Code Wall cannot be lowered.

"All my best tricks were shrugged right off. I ended up having to send a self-destruct code to the whole server." - Wyvern
Illustrated by Shawn Ye Zhongyi
Decklists with this card

I'm just going to guess Wyvern's tricks consisted of Datasucker, Parasite, Şifr and of course the most powerful of all: Wyrm.

Jokes aside, this is a counterplay to a single card: Parasite. Since strength 1 is low enough to break with most breakers without boosting its main, if not only, value is to stop someone stripping all ice from a server using Parasite.

Unfortunately Self-Adapting Code Wall isn't cutlery resistant, so a simple fracter and a Knifed will still get rid of it.

Which makes me wonder what the practical use is. How often are you going to see a runner who relies only on Parasite and can't access cards in a server otherwise. Yes, Eater is a thing, but decks that run it usually either have non-Parasite forms of ice destruction or some kind of backup breaker (though, granted, if that backup is Faust Self-Adapting Code Wall is pretty taxing for the money).

Self-Adapting Code Wall, in terms of strength for credits, is worse than the similar Lotus Field. Now that's somewhat to be expected in a neutral card but Lotus Field feels like it's got an awful lot more bang for the buck. May just be psychological though.

At 3 another neutral card, Wall of Static, offers 3 strength. So you're passing up on 2 strength in exchange for not being breakable with Parasite. The ability is undeniably useful, but I don't think it's worth 2 strength.

Still, FFG must have had a reason for printing these numbers. So what am I missing here?

(Station One era)
Silv 345
Well, it's a gear check. It forces the runner to find their Fracter in order to get in, and by being unable to be taken down by Parasite it ACTUALLY does this rather than getting Parasited. — LordRandomness 30 Mar 2017
Of no gameplay relevance, just asthetically annoying: the 'w' in 'wall' is not capitalized in the card's title. On all the other 'Wall' ice, the 'W' is clearly taller than the small-caps 'all'. — Jeffrey Bosboom 31 Mar 2017
@LordRandomness Good point. Though I would argue that a Wall of Static is in most cases just as much of a check. Sure, it can be parasited but that takes 3 turns normally (which is a good result for a gear check) and how high are the odds that the runner has Parasite and Sifr out but not yet a fracter? — Silv 31 Mar 2017
I never said it was a GOOD gear check :V — LordRandomness 2 Apr 2017
I can imagine putting this in a Sandburg deck. With 3 of these and 3 Lotus Field, you could lock out any runner relying on Sifr too heavily. — flagellumVagueness 4 Apr 2017
It is a bad wall of static that is immune to some anarch tricks, principally the parasite. If you are in the market of rather expensive gear check barriers that do not die to parasite, this could be for you. — Severijn 8 Apr 2017
@Jeffrey Bosboom - Good pickup. And you can see how they have clearly enlarged it inside of the body text. I'd say CAPSLOCK intern may have written this card on a bad day. — Scoogsy 18 Apr 2017