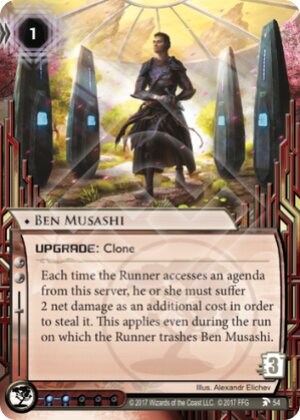 Persistent → As an additional cost to steal an agenda from this server or its root, the Runner must suffer 2 net damage. (If the Runner trashes this card while accessing it, this ability still applies for the remainder of this run.)

Seems good, and definitely synergizes with Obokata Protocol, but I get the feeling that Film Critic is going to be an auto-include again soon, limiting effectiveness.

Although if someone doesn't have it, between this, Obokata Protocol, Prisec, Kakugo, and Hokusai Grid, you could make a server that does 9+ damage to steal an agenda. Not bad.

So, it cost the runner a one card more than Prisec, one less tag than Prisec and is only useful if it is protecting an agenda. Meaning, if you must choose between Prisec and Ben Musashi, Prisec is the obvious choice. Unless you want an additional suite of protective upgrade, and do not want to spend influence on Ash, then you should give Ben Musashi a look.

Ben Musashi is more certain than Marcus Batty, and does not care for a trace like Ash. But to protect agendas (or anything else), you might want to look at Embolus or Bio Vault before turning to Ben.

Ben Musashi fit well in Jinteki. But it is much more specialized. In grinder deck, it is excellent, because you can pair it with agenda that does not ambush. Pushing the grinding effect further, since the opportunity cost only would be only 2 cards for the runner, the runner most likely will pay for it. And at 2 influence, it is easy to splash it outside of Jinteki.

Not a great protective upgrade, but it has a place for certain strategy. But only after taking Prisec.

On a side note, Musashi is a mythical japanese swordman. A quote or flavor text would have been nice here, to go along with beautiful picture.