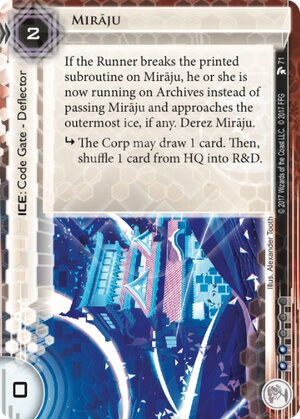 Whenever an encounter with this ice ends, if the Runner broke its printed subroutine, the Runner moves to the outermost position of Archives instead of passing this ice. They may jack out. Derez this ice.

subroutine You may draw 1 card. Then, shuffle 1 card from HQ into R&D.

Illustrated by Alexander Tooth
Decklists with this card

A subtle card and not quite as bad as it may first look. Mirāju may have strength 0 but it's value is not in stopping the runner through subs but in taxing the runner.

Essentially Mirāju is a question: runner, do you prefer the corp to optionally draw a card and (not optionally) shuffle a card from HQ into R&D or would you like to end the run? It doesn't say this on the card, but in effect running on archives is as good as ending the run (except if the runner wants to run on archives).

Unlike most ice the sub on Mirāju is likely to be broken only once: when it's rezzed the first time. Since breaking the sub means not getting into the desired server (or in the case of Mirāju on archives being bounced back to the outermost piece of ice) a runner, broadly speaking, has three choices:

With most code gate breakers breaking Mirāju, and thus derezzing it, costs a credit and a click. It costs 2 credits to rez Mirāju. Since a click is worth more than a credit derezzing Mirāju costs more than rezzing it. If the runner has a money advantage that's not necessarily a problem, though it still costs clicks and that may hurt more than the credits.

It may be more appealing to the runner to let the sub fire. This however gives a huge advantage to the corp if done regularly.

When building a deck around Mirāju be aware that there's synergy between Mirāju and Chief Slee that makes runner through Mirāju regularly a really bad idea. Especially in a kill oriented deck this is a scary combination.

Mirāju does have some downsides to the corp. It can be difficult to keep rezzed if the runner is willing to break it repeatedly, those 2 credits per rez do add up And the second clause of the sub is unconditional, if the runner runs through Mirāju the corp has to shuffle a card from HQ back into R&D, even if it would mess up their plans.

By the way if you're thinking of slapping a Sub Boost on Mirāju, that won't work. The special ability only works on the printed sub, not all subs.

Overall Mirāju is a good cheap piece of ice for gaining an advantage through the actions of the runner and deterring all too aggressive running.

(Blood and Water era)
Silv 340
It's also excellent anti-indexing tech, if that's your kind of thing. — ninjaiguana 5 Jul 2017
How does this interact with Inversificator's swapping ability on passing? — Mark.Knights 11 Jul 2017
Inversificatior swaps on passing, but you don't pass this one. You are running on Archives _instead_ of passing! — Krams 12 Jul 2017
I have been playing with this quite a lot and it is deceptively good. It helps enormously if you are getting flooded, since they either don't get in, or (far far more likely), they let it fire and you shuffle away 1 unwanted agenda. But it is also worth noting that it provides velocity through your deck. "Looting" as we call it in a collectible card game that shall remain nameless, is quite helpful for the corp, who often wants to find the right cards at the right time. Think of it as a mini-Jackson, every time they run HQ: moving through your deck AND hiding agendas. — syntaxbad 19 Jul 2017
1

When I first saw this spoiled, I was excited, as Mirāju looked like it was bound to be how Jinteki decks would mitigate agenda flood; but with some testing and the UFAQ, this potential really hasn't been met.

Mirāju, as a piece of ice, only triggers if the runner actually runs it, which means if you draw into too many agendas, you need to hold onto them until the runner runs into it, which still leaves you stuck with the several turns of operating at minimal efficiency, as you are forced to do things in the wrong order, or just accept that you'll be discarding valuable cards.

Mirāju looks like it was written to give the corp the choice of drawing and shuffling, or doing nothing; but the UFAQ says the corp doesn't need to draw to shuffle a card away, so you have to do so, no matter what.

This is a pretty severe downside, as it if the runner has some multi-access, such as with Medium, or R&D Interfaces, an easily accessible Mirāju is a death sentence, as the runner can easily run into it to force a shuffle for fresh accesses.

Problem 3 - Low value on other servers

Primarily as a result of the shuffle not being optional, Mirāju is pretty low value on servers other than HQ.

Miraju doesn't do anything to stop the runner siphoning you into the ground, so you either need additional, normal ice on HQ, or you need other cards to help protect you from siphon, like Crisium Grid.

Miraju is not as cheap as it appears, 2 credits sounds cheap, but it's not the whole story.

Miraju, purely by being a piece of ice, adds to the install cost of other ice you install; which if you want 2 or 3 other ice on HQ, it will easily cost you an extra 2-3 credits.

Miraju is pretty good for keeping you from losing agendas out of HQ, but it's value is so narrow that it's simply not practical to use for much else, and even for protecting HQ, some normal taxing ice is often going to be similarly helpful.

This is further made worse by the fact that Miraju is the kind of ice you want to see early, but with only one good place to put it, including 3 of them is bound to result in not drawing suitable ice for other servers, or drawing them late game with more than enough ice on HQ already.

You could probably run a couple of them in most Jinteki decks, but most of the time, two or three triggers of it won't be a real game-changer; and that's probably the best you are going to get.

Maybe if Jinteki gets some kind of reasonably efficient ice-tutoring operation, then the situational downsides could be mitigated, but until then, maybe you'd rather just have a few copies of Mind Game, or something else taxing?

(Free Mars era)
Quarg 255
As of now, I just won a game off this ppiece of ICE - while playing Sunny against AgInfusion. — Foxtrott 1 Dec 2017