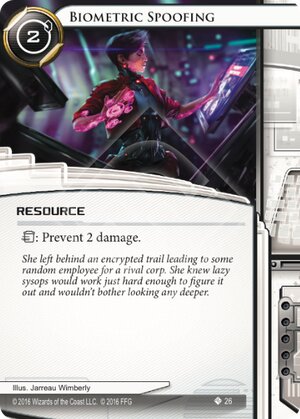 She left behind an encrypted trail leading to some random employee for a rival corp. She knew lazy sysops would work just hard enough to figure it out and wouldn't bother looking any deeper.
Illustrated by Jarreau Wimberly
Decklists with this card

I find it hilarious that a card talking about "lazy sysops" not properly checking their work, has the exact same artwork as a card which mentions making a duplicate of yourself to save doing twice the work.

(Terminal Directive Cards era)
Goeshi 146
..omg D: — metricsix 28 Apr 2017
Or maybe that's the point. It's a meta-meta joke.... — HolyMackerel 28 Apr 2017
They also credited different artists on each card. — Goeshi 28 Apr 2017
Can't believe this was done on purpose. First the careless, gimmicky wording, then art duplicates... At this rate, the next data pack will be printed on cardboard. Or toilet paper. — H0tl1ne 28 Apr 2017
Can somebody who actually has the TD box and Daedalus Complex confirm that art is indeed mixed? Because it is possible that this art (which is pulled from FFG site, IIRC) is a result of some mixup on FFG's side. I don't think they would be that careless? — Gargulec 28 Apr 2017
As someone pointed out over on /r/netrunner, the artist credited on Bio-Modeled Network is Marius Siergiejew, an artist in Poland whose style looks nothing like the art on the card. The credited artist on this card, Biometric Spoofing, is Jarreau Wimberly, a US-based artist whose style matches. This suggests that Bio-Modeled Network, not Biometric Spoofing, is the misprinted card. — StaticSky 28 Apr 2017
@Gargulec. It's mixed up on the printed cards too. I have both sets. — Goeshi 28 Apr 2017
So you followed the datatrail and found an artist in Poland, but did bother to look deeper, hm? Let's just roll with the idea that it was a very elaborate meta joke from FFG and be happy about it ;) — Infectiou 17 May 2017
Oh wow, I didn't even notice this. That's hilarious, given how often Fantasy Flight reused art in general. But to think they reused the art on another Runner card, I think that's a first. — sekoku 5 Sep 2018
The Nisei Organization could reuse art like FFG did to dramatically cut down on costs and time lag. — Apex Predator 7 Sep 2018

Biometric Spoofing feels like a weaker but more flexible version of Plascrete Carapace. In terms of economy it's not great, 2 for 2 damage prevented. In terms of saving you it's decent-ish. Being able to prevent 2 damage can make the difference between life and death but it could also turn to be completely useless.

And unlike Plascrete Carapace Biometric Spoofing is an all-or-nothing proposition. If you take 1 damage and want to prevent it you have to trash it, so if you get damage from multiple sources death-by-a-thousand-papercuts style it won't help all that much.

The big benefit of Biometric Spoofing is that it prevents all damage types, including brain damage. Brain damage is notoriously difficult to land on the runner. Being able to avoid some of that really defangs decks that rely on it.

(Terminal Directive Cards era)
Silv 345
I agree except at 1 point: Compare to a card like Hedge Fund. Instead of 2 credits for 2 damage, it is more like 6 credits for 2 damage. This is only useful against flatline kill decks and brain damage in HB, otherwise its almost a dead draw due to how high its costs are. — Apex Predator 7 Sep 2018