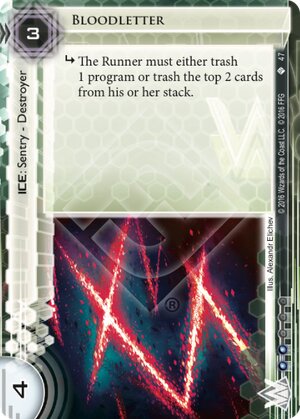 subroutine The Runner must either trash 1 program or trash the top 2 cards from his or her stack.

Bloodletter is a taxing piece of ICE with a punishing but porous subroutine. As a strength 4 sentry that can be rezzed for a mere 3, it offers excellent value for the corp- most killers cost 4-6 to break it on their own, and it's out of an unboosted Mimic's reach. That's an incredible tax for its rez cost. Furthermore, unlike certain other program trashing sentries, this one will hit the runner even when facechecked early on without breakers- because it offers the runner a choice between trashing from the rig or the stack, they must trash from stack if there are no installed programs to sacrifice.

This choice-based subroutine, however, is also the card's main weakness. What typically makes program trashing ICE good is the threat of sniping key icebreakers during a run- sometimes with the help of Marcus Batty. Bloodletter doesn't work for this purpose. Since all choice is left to the runner when resolving the sub, anyone with a stack to trash from or spare programs to sacrifice can get past Bloodletter while keeping the key parts of their rig intact- hence it can't reliably protect a scoring remote or centrals full of agendas. This flexibility for the runner, measured against Bloodletter's high cost to break, means you're likely to see its sub being fired far more often than most other sentries.

Bottom line, this ICE does reasonable deterrence but can't keep a determined runner out.

Bloodletter has some extra sting in Skorpios, where its sub allows the corp to permanently remove key cards from the game. It also complements the 'thousand cuts' approach of Jinteki IDs like Potential Unleashed and Personal Evolution if they can spare the influence.

(Terminal Directive Cards era)
Snowscoran 45
Also because the runner chooses the program to trash it's unlikely you'll manage to snipe away a breaker needed during the current run. — Silv 6 May 2017
You're correct, of course. I've edited to clarify- both spare programs and stack trashing work as a method to get through, and the chance of it sniping a key breaker is very low. — Snowscoran 6 May 2017