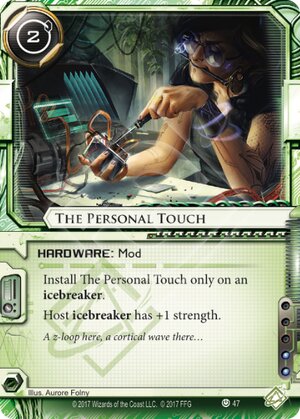 Install The Personal Touch only on an icebreaker.

A z-loop here, a cortical wave there…
Illustrated by Aurore Folny
Decklists with this card

A simple +1 Strength may not seem like a large amount, but it can and does have a great effect. Consider the use on the fixed breakers, Mimic and Yog. Consider the use on expensive to pump breakers like Femme Fatale. It can, and will, over the course of the game save far credits than the two and a click it costs to install it.

Personal Touch is, notably, the only Hardware that is hosted on a program - the other similar types of hardware host programs on themselves. What this has for an effect on the game is not really clear - It may have no effect, there may come an odd interaction down the line where it does create an issue.

Personal Touch hasn’t seen a ton of use, but it is a solid way of saving credits, or putting fixed breakers up into a higher range. It also saw use with Darwin to help keep a strength after the corp purges virus counters.

(Breaker Bay era)
lynkfox 379
I've seen a few interesting builds using The Personal Touch to improve the base strength of Switchblade. It's probably unnecessary, but I find it a clever way of conserving stealth credits against decks with multiple low-strength senties (looking at you Jinteki). — FarCryFromHuman 15 May 2015
The biggest benefit is that you're far more likely to get your programs out first - typically the issue with cards like Dinosaurus is that you have to get it installed before your programs come out. Given that there's only 1 hardware tutor, and it's expensive to install and use, you're far more likely to use an SMC first. With PT, you can install breaks, use them, and then, whenever PT comes out, toss it on your breaker of choice. Much more likely to see use. — Wookiee 22 May 2015