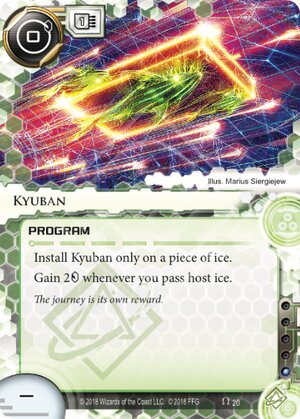 Install Kyuban only on a piece of ice.

The journey is its own reward.
Illustrated by Marius Siergiejew
Decklists with this card

Kyuban, as a card, asks for a very particular set of circumstances and feels like a card to be built around rather than slotted.

2 credits is not a bad amount of money to see on a card; Security Testing, Daily Casts, Armitage Codebusting exist on similar numbers.

So why does this little 0 to install beastie not see play everywhere?

Well the problem with a card whose only benefit is to give you credits is that it is, fundamentally, economy. And one thing one wants to avoid is providing your opponent with opportunities to frustrate your economy. Even if the runner goes to the trouble of finding a piece of ice they are happy to pass constantly and placing the Kyuban on it they can only run it a certain number of times before the corp can reinstall.

Therefore it can't be the core part of your economy in the same way that Sure Gamble/Daily Cast/Liberated Account can be.

That said I am starting to find that this card has unexpected high levels of power but it needs to be built around.

The runner has to be able to put pressure on the corp consistently so that the corp can get short of money and time. This requires some aggressive running on the runners part; either being willing to weather a facecheck, avoid a facecheck, or reliably break anything that the runner sees.

The runner also needs to be gaining something more than just the 2 credits on each run; because otherwise why are you not clicking Armitage? Perhaps this could be accesses from centrals, perhaps it is additional run based economy, perhaps you are powering up a Turning Wheel,

The runner also needs to have the spare MU to absorb the MU cost of the card itself.

Personally I enjoy this card a great deal at the moment; it feels like exactly the level of an interesting card at the moment.

I'll await someone building a monster with it and me hating it as with all "whenever cards" .

This is surely a support card for agressive shaper decks that consistently run R+D, or with it being only 1 influence, can be splashable into criminal decks that work HQ hard. Its essentially a (even better) Gabriel Santiago ability, as its not dependent on a sucessful run, but instead just passing the chosen piece of ice Add to that fact that it's not unique, and you can stack up to 3 of these (if you've got the spare memory) on different pieces of ice protecting the server, leaving the corps ability to install over it and trash Kyuban kind of moot, as they'd have to lose several pieces of ice protecting the server to do so. Multiple copies of this card coupled with a desperado gets REAL nasty, with the ability for the runner to gain 7 credits per run, and they all trigger on EACH run, rather than just the first like Gabe's ID ability.