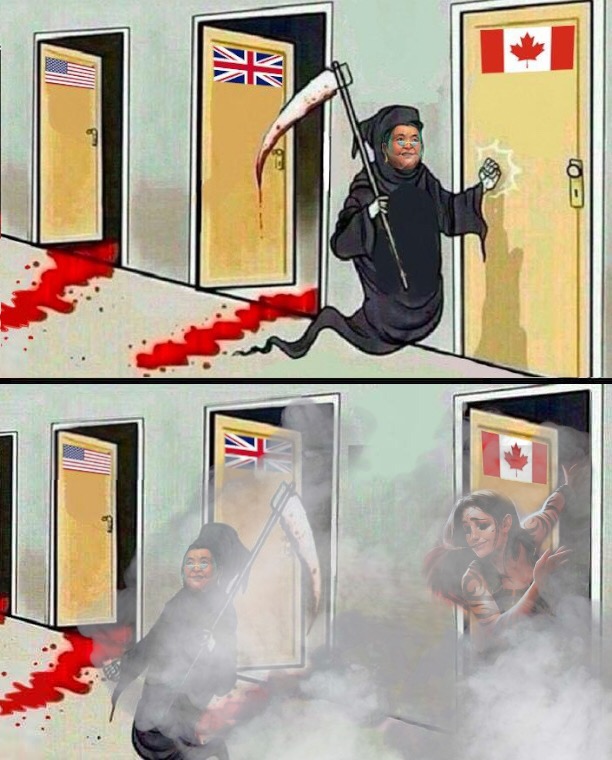 Grim Reaper Liza came knocking on the door but Smoke was there with some top notch Misdirection. (Credit to @Zerothmaxima for this high level content)

The is the list I used that went undefeated to win Canadian Nationals alongside a Self-Growing Corp deck. Since my Racoon Tech got hit with the removal of Laamb, I had no idea what runner to play when testing for Canadian Nationals. I tried Reg 419, Reg Val, Swift Val, and Apoc Alice a lot but I realized that I’m just naturally a Shaper player. I also realized that it costs a whole click and 2 credits just to remove 1 tag and WHY WOULD ANYONE DO THAT!? ProCo/Pawnshop Hayley was basically the only shaper floating around but I have a huge dislike for ProCo because installing it usually gives the Corp a ticket to score an agenda. So I turned to an adapted Kabo list with normal breakers before realizing that Smoke just does everything better. It was a very diverse meta on the day with many different types of decks. I like to play flexible decks (so basically Shaper) so I like the way that turned out. I was actually the only Smoke as well.

The main game plan is to get a Paragon installed ASAP and then start playing Dirty Laundry on open servers once per turn. Once you get a Net Mercur out and start doing the above while also pumping a breaker for free Net Mercur credits then it becomes very difficult for the Corp to stop you. Turning Wheel and Kyuban is a sick combo. If you can spend 4 clicks gaining 8 credits and 4 Turning Wheel counters then you’re in an amazing spot.

That’s the general idea but if anyone has questions about anything please ask in the comments and I’d be more than happy to provide specific responses there!

The deck was shown on stream against PE during round 3, against @Whiteblade111’s Argus in the winner’s finals, and again against the same Argus in game 2 of the grand finals. Here is a limited time link to the VOD.

I was told after the tournament that I took over the record for the youngest Netrunner national champion after @Whiteblade111 held it for all of two weeks after his victory at U.S. Nats. That sounds like a decent record I'm quite happy with!

MUST READ Highlight of the tournament: I was playing my Argus vs @goodknite’s Stealth Wu when he asks if he can use the “Expose 1 piece of ice, then make a run” ability on Deuces Wild if there is no unrezzed ice on the board to expose. I said yes but we decided to check it with a judge. Both judges weren’t sure and after 5 minutes almost everyone at the tournament was crowding over our table with a fairly even split of “yes you can” and “no you can’t” answers. Somebody suggests that we should ask Dan D’Argenio about it since he created the card. So Dien pulls out his phone, calls Dan, and puts his phone in the middle of our table on speaker. Dan picks up, he’s told the scenario we are in, and is then asked if selecting the 4th choice is allowed. Dan’s response on speaker with everyone listening: “......that’s a good question”. Then Dan goes on and gives a “based on my understanding of the game” answer saying that he believes the answer is yes and then explains why. We then got a response from one of the NISEI rules managers confirming that the answer is yes.

Huge huge shoutout to @Bazin for running a smooth tournament and hooking us up with some sweet extra swag! Also an extra shoutout to everyone who made the journey from out of town; it truly made the weekend so much more amazing! Best. Community. Ever. 💗💗

Bonus trivia question: Can anyone tell me how many times Mausolus fired during game 2 of grand finals?