"It's the most fundamental element of illusions and running both. In either case, it should be the first skill you master." -Ele "Smoke" Scovak
Shaper • Michelle Lockamy • Martial Law 85
All sets:
Links: Decklists | ANCUR 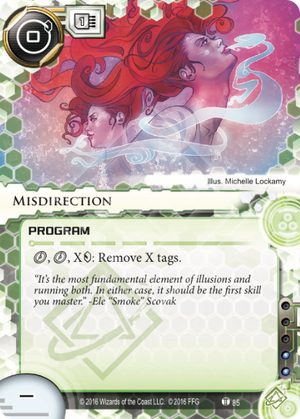 This card is interesting in that it takes tag removal out of its traditional home in Criminal (e.g., Networking, Paper Tripping).

A popular tool for tag clearing right now is Networking which is more efficient than Misdirection for clearing a single tag, as efficient with two, and increasingly less efficient as the number of tags increases (assuming equivalency of and ).

Obviously an important card on everyone's mind right now is Hard-Hitting News. Clearing the resulting 4 tags in one round, or simply avoiding a crippling tempo hit, can be critically important for certain decks. Without Misdirection you are paying 4 and 8 to clear the tags. With Misdirection installed, you are saving 2 and 4, and importantly need only have 2 as opposed to 8 in your pool at the start to recover in one round (->,->, use Misdirection). Note that with Magnum Opus installed, you can clear up to 4 tags in one round from 0, greatly reducing the efficacy of Breaking News/Closed Accounts combos. This compares favorably with Networking which requires 4 and 4 to recover

This card also brings into the realm of possibility recovery from a high value Midseason Replacements without the use of Paper Tripping.

The fact that it is a program is nice because it can be tutored easily out of Shaper (even if you use Self-modifying Code to fetch it you are paying 2 less to clear all tags from Hard-Hitting News which may mess with the Corps math) and it is not susceptible to being trashed if a tag does land. Nonetheless, that's another 1 for your rig. I imagine this card will definitely see some play in Shaper at least considering it also saves 1 influence pip over Networking and doesn't need to be held in hand.

(Martial Law era)
FreqKing 224
The implications against Sync are the most interesting. — FarCryFromHuman 15 Dec 2016
Absolutely, great point. — FreqKing 15 Dec 2016
I don't think it's great against Midseasons. If they have the credits to clear, then they could probably have fought the trace. Obviously there'll be some exceptions if you can gain credits quickly. — whirrun 15 Dec 2016
I'd agree it isn't great, it merely brings it into the realm of possibility. If you're sitting on 10 tags, 20 credits and 10 clicks is likely gg. With misdirection that falls to 10 credits, 2 clicks, still achievable, especially if you also run Opus — FreqKing 15 Dec 2016
I think whirrun's point is that if you had 10 credits in the first place, why didn't you spend them against the Midseasons trace to prevent 10 of the tags from being applied? — LordRandomness 15 Dec 2016
I also interpreted it that way. I guess I was taking as given that the corp had more money than you when Midseasons was played (nearly always true) such that even if you went all in, you could have significant tags to clear. With Sure Gamble in hand you can clear 9 tags by round 2 from zero, with Mopus 4 in 1 round or 12 in 2 rounds. Admittedly, their short term plan has landed by then so you may be dead. Again, I'm in agreement that this isn't a silver bullet against Midseasons, just saying there will be a non-zero amount of games where you can keep playing without going tag me which can be pretty dangerous in the current meta. — FreqKing 16 Dec 2016
Unfortunately it is a bit prone to Best Defense (as would be SMC at the ready) — otoconia 19 Dec 2016