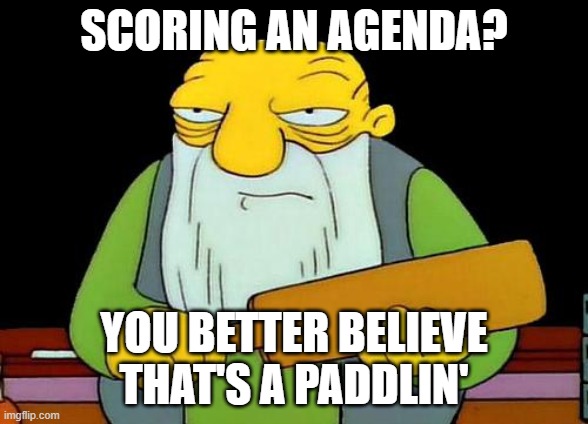 There isn't much special about this deck except that it was a pretty great meta call, considering Asa, so I won't dive deep into too much of the card choice; it's good stuff Leela! Shoutout to the creator of this deck, Radiant; I was way more panicked about deciding on a corp versus runner and I asked Radiant for his Leela list, took one look and said "Yup, this is it. Not changing a single card."

And I stand by that statement.

On the day, I actually felt like I did really well, despite having a poor and demotivating round 1 against a fantastic opponent (Thanks, Diogene!)

Round 1: Loss (Saraswati) - lol, they were on Jinja turbo glacier and game went to time - they scored one agenda and couldn't find any others and I found 0 :/

Round 3: Win (Sportsmetal) - They constantly did not respect the Leela triggers and had open centrals pretty often but I get it - I've played against Sports a lot in testing that didn't care about ice and just FA'd out of hand constantly!

Round 4: Win (Titan) - Was able to keep sufficient pressure on to keep them on the back foot, easily securing the W

Round 5: Win (PE) - learned my lesson and yomi'd (read: guessed correctly) my way to victory. Came close to dying a couple times and almost ran out of stack!

Round 6: Loss (Argus) - Ok, so this one was 100% my fault. My metamate, FireRL, plays Argus all the time (and was top Argus at Worlds 2020!) but plays a no HHN deck, built around grinder glacier. So... I forgot who I was playing against I paid the ultimate price

Round 7: Win (Palana) - They tried to rush out as I frantically couldn't find tools. Came down to the literal last click and I yolo farmed and dug R&D with TTW counters and secured the 7th point on the last TTW counter

3x Diesel is pretty much a requirement when the top decks score out by turn 8 at the latest. You need the tools!

People have argued about Peace in Our Time, but I think the click compression it offers you to turbo setup to be ready to strike the next turn has been incredibly valuable. In most of my worlds games, it pushed me "not at all ready" to "we're gonna party and I'm taking that card."

The deck is filthy rich. Miss Bones, I'm sad to report, is pretty busted. Even amongst glacier, there wasn't a single match where I wasn't getting strong value out of it, via trashing high-impact assets and upgrades. Don't cut.

Leela has always been a favorite runner of mine due to her strongest feeling of "momentum" in the game. The corp has to actively play around your ability and either be okay with losing protection somewhere for the sake of a scoring window or they have to restructure and telegraph the scores much differently. As such, with Tapwrm (also busted, imo) around as your singular virus (and comboing with PioT lol), you can put even more pressure on corps to either button up centrals to prevent another Tapwrm strike or simply let them just try to gas out and ignore the worm. Either way is a delight for Leela to see.

The Seattle Meta and Worlds

Thanks so much to my testing crew to have the patience to deal with my whining, groaning and complaining in the lead up to worlds, haha. Radiant, FireRL, Sedatedfork, Smittyl, Runaway, Risingconcern, PureFlight (miss you!), and anarchomushroom (thanks for joining our weird corner!). I was really unsure about even playing (my meta knows me too well and absolutely can crush me pretty often) but I'm glad I stuck with it. For my first worlds showing, I feel really proud of my play and the amazing opponents I had. I felt zero salt from losses (except for the turbo flood my AgInfusion was prone to!) and had fantastic conversations during and after matches with my opponents. My hope next year is to be able to actually meet and hang out with this amazing community.

And, as always, a big healthy thank you to the NISEI crew - OP and the MWL committee: Thank you for sinking so much thankless time into this dead children's card game that we are all so passionate about.

Cheers and I hope to see you all next year!