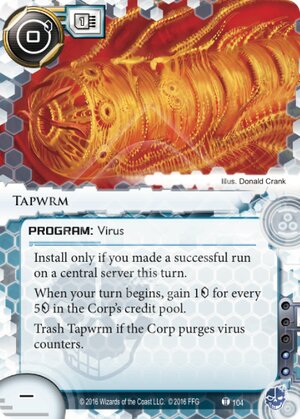 Install only if you made a successful run on a central server this turn.

When your turn begins, gain 1credit for every 5credit in the Corp's credit pool.

I really like Criminal's viruses. They're all such entertaining ways to get money. (Ok, Cache is kind of boring. But Pheromones is wonderful, and Gorman Drip v1 is hilarious.)

Anyway, Tapwrm is a worth entry into their ranks. The cost is cheap, and the install criteria is pretty minimal. (You can even install it off of archives!) It has some nice bounce-back effects - if the corp is super rich, this thing will pay serious dividends. It has counterplay, since it's a virus. And it rides that wonderful line where the corp has to continuously ask themselves "Should I purge? Is it really worth skipping a whole turn to stop them from getting 2? Maybe I should do it later?"

This card isn't powerful to be the focus of any decks by itself. But it's pretty good drip economy, that scales when you're behind, and it's cheap. I expect we'll see this start to show up in criminal decks - runner drip economy tends to be expensive, so anything with the potential to pay for itself on the first turn is noteworthy.

(Quorum era)
Bwob 662
Just a fun card. Combo with Peace in Our Time and Beth. Of course you've given the corp money with that combo, so you'll want to tax them in other ways (ICE destruction maybe). I'm glad about the install requirement. For a while there I had a vivid nightmare of Noise decks made up entirely of viruses, Chop Bots, and Deja Vu. — quailman2101 15 Jan 2017
I have one in my Professor deck (of course) and it is insane with SacCons late game. love this card. — DarkHorse 22 Jan 2017
6

If you are playing Daily Casts in your Criminal Deck right now, consider giving Tapwrm a try instead. Tapwrm can earn you much more in credits than Daily Casts, and it puts pressure on the Corp to either keep its credit count low or spend time purging. It also has a lower up-front cost than Daily Casts.

This card is most effective when you are not running lots of other virus cards. When the Corp's decision about purging is just to eliminate this card, it becomes much more difficult to justify.

(Quorum era)
FightingWalloon 50
I've yet to see a corp manually purge once I've played a Sac Con to support this. 6 clicks to prevent the runner from gaining 1-2 credits a turn (typically) is just not appealing. — Oooer 17 Feb 2017