On a warm morning in August, in the year 20—, Mr. Andrew T— retired to his study. A certain task had been wanting his attention and now, with a day of leisure ahead of him and with day four of the Test match yet to begin, he thought this the right moment.

It was not, in truth, an onerous task. Earlier that week-end he had travelled north by train to the seven-hilled Steel City of Sheffield, there to play in a tournament of cards. His day had gone well — so well, in fact, that he returned to London with the trophy, and with the warm congratulations of his fellow contestants ringing in his ears.

It was the custom at that time for card players to publish an account of any success they might have, detailing their card choices and play decisions, and recounting any interesting, unusual, or amusing occurrences from the day. And so T— bent to this task. His case was, perhaps, particularly delicate, as he had chosen a card-deck not well loved by the wider community, and he was keen to leaven this decision with light-hearted prose, and perhaps a pictorial joke of the kind that were called "memes".

It was, as mentioned, a warm morning. So warm, in fact, that T— was obliged to send for a cool glass of iced water, from which he sipped as he worked. Time passed, and he detailed first his preparation for the tournament, then his lengthy journey northwards. He had just turned to the meat of the matter, the round-by-round account of the day, when he stopped in amazement. The glass that he was lowering from his lips was not a glass at all. It was his trophy, won just the previous day. And he realised with a start that he was not drinking water at all.

A moment, here, to describe this trophy. In form it was simple enough: a chalice approximately seven or eight inches in height, mounted on a plinth of polished rosewood. A plaque on the base proclaimed the owner 'NISEI Sheffield Regional Champion 2019'. But the devil was in the detail. On either side of the body of the chalice were wrought two skulls, grinning and hideous. Around these skulls was traced a confusion of cogs, pipes, rivets, and other industrial ephemera. One one side there was a clock face, though shorn of hands and somehow integrated into the pipework. Each skull had two cogs for eyes, and a third mounted in the centre of its forehead.

Where it came from, and who created it, is a matter of some debate. Some scholars have found in the positioning of the skulls an echo of the old Roman god Janus, whose divine ambit included gates, and doorways, and beginnings and endings. Others have noted the cog on the head of the skull, and declared this a sacrilegious parody of the 'Third Eye', as described by scholars of the mysterious East. Neither theory, however, can account for the unsettlingly modern nature of the tracework, which resembles the guts of some infernal machine far beyond the imagining of Rome or of the Buddha.

More prosaically, it is not even simple to determine exactly which metals were employed in its manufacture. At times a part will seem copper, at others bronze, or brass; from some angles, one might determine the whole thing to be gold, albeit of a sickly and impure carat. A number of metallurgists and chemists have pronounced themselves baffled by its manufacture; the only point of agreement is that it is hard to study the object for any length of time without feeling nauseated. Light moves across the surface in queasy, unsettling fashion, and the shadows do not always appear to be in the right place.

At this curious, baleful object, T— sat and stared. He had intended to drink from his water glass. The trophy had been placed in his curiosity cabinet, between the fossils he had gathered at Lyme Regis and his collection of interesting feathers. But now it was here, in his hand. His headache throbbed. But then he swallowed, and his mouth filled with a sweet, rich taste, and he thought of nothing else. Thick, red liquid oozed to the very edge of the trophy; he took another deep draught, sweet and warm, yet the chalice seemed no emptier.

The liquid, whatever it was, seemed almost to suck at the brim. Another sip. Another. His mind was consumed by the sweetness. And the hammering in his head grew louder, and clarified; took on rhythm, and form, and became words.

"Bargain made," he heard. "Bargain struck."

"For what shall it profit a man, if he shall gain the whole world, and lose his own soul?"

"The clock may stop, its hands fall still."

Draw. Draw. And shuffle back."

Nobody ever saw Mr. Andrew T— again. Attending authorities found only an empty, abandoned study, a half-full glass of water, and a desk covered in frenzied notes, diagrams, and strange sigils. The narrative above has been pieced together from the legible portions. As for the trophy, it was locked in the cabinet, between the fossils and the feathers. It was empty. 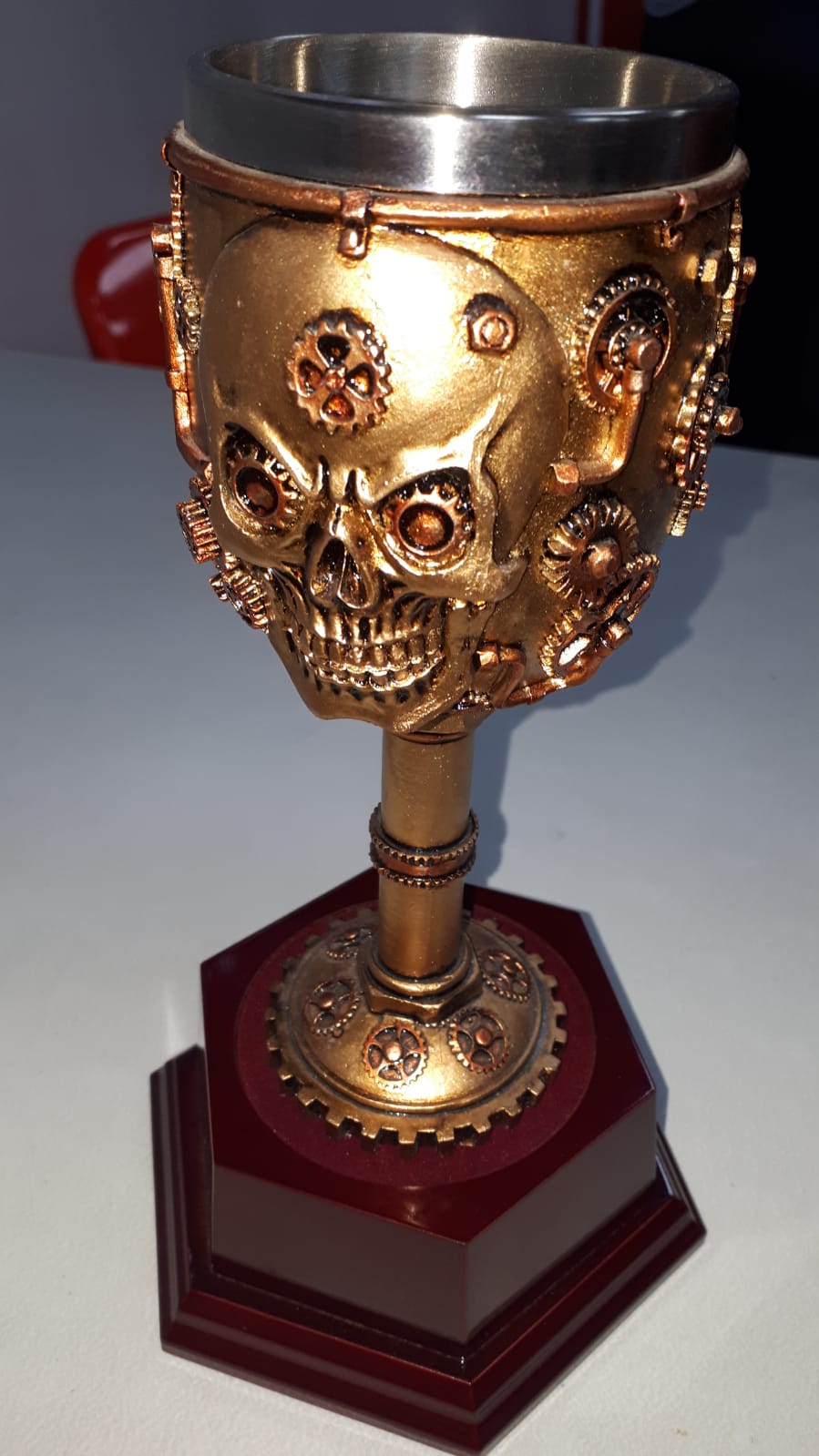