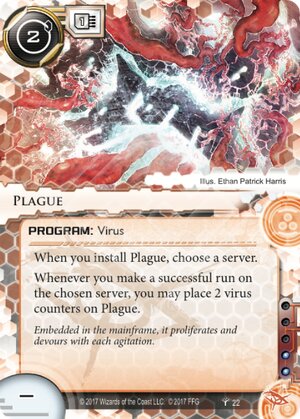 When you install Plague, choose a server.

Whenever you make a successful run on the chosen server, you may place 2 virus counters on Plague.

Embedded in the mainframe, it proliferates and devours with each agitation.
Illustrated by Ethan Patrick Harris
Decklists with this card

Does nothing on it's own, and is even pretty inefficient at doing that.

Obviously intended to be used with Yusuf and Freedom Khumalo: Crypto-Anarchist as they let you actually use these counters. If you do, the payoff isn't actually that bad, as it could bring the virus counter cost of running HQ or R&D repeatedly pretty low.

However, at present, there's not really much that lets you capitalise on that, as there's not much multiaccess that rewards repeatedly running the same server with Medium and Keyhole rotated. As such, you probably don't really want to be running a high value server more than once a turn, or even every turn most of the time, making Virus Breeding Ground quite possibly a better option, saving you MU to install other cards, helping mitigate the downside of being purged, and letting you accumulate virus counters without needing to spend them on running a specific server.

Oh, and it's comparison to Security Testing, though not totally fair, is pretty atrocious.

I didn't even remember that this was a card that actually existed!