Shattered Remains can be advanced. 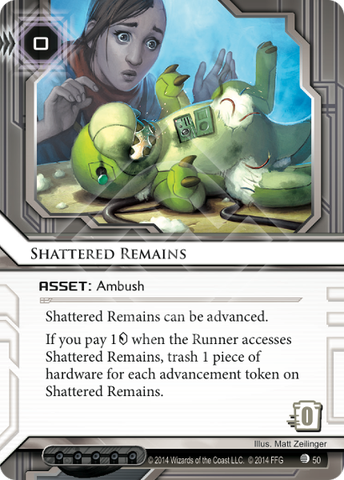 While initially this card seems underwhelming it has a variety of uses.

First off, like all ambushes, it is improved by the existence of Mushin No Shin and Back Channels. Mushin reduces the clicks/credits necessary to set the arrangement up. Back Channels retroactively makes all of your "click to advance" clicks into "click for 2 credits" by giving you 3 credits per advancement counter.

Next up it fires for just 1, like junebug. This isn't a matter of needing 4 like snare or 3 like overwriter. Firing off a shattered remains is a casual decision, you'll be back at capacity after clicking for credits once.

The actual effect of this card is where it seems like a letdown at first. Blowing up their hardware doesn't turn off their icebreakers or flatline them. The key thing to remember is that the runner put those hardware cards into their deck for a reason, and that they probably don't have a plan for them getting destroyed.

Killing a Clone Chip keeps dead whatever it would have cloned. Killing a console can deny them turns worth of tempo, whether from lost credits from desperado or lost virus counters that would have come from Grimoire. Popping their chips may make their underworld contacts stop sending money. There isn't a paid ability window between access and the ability firing, so they can't get their stuff off of personal workshop if you are living the dream. R&D and HQ interfaces exploding is a big deal. Plascrete suddenly being gone can be the game.

Traps have seasons though. This isn't a start of game trap. Its dead in your opening hand, who wants to blow up the hardware of someone who hasn't installed any yet? Its an autumn trap, after the game has assumed its shape. Put it down and advance it twice behind ice you suspect the runner can get through. Like aggsec it is effective with just a counter or two on it, so if the runner suspects a trap and draws out of junebug range before accesses it won't save them.

Ultimately, I think this card won't be fundamental to a corps strategy, but with a cheap 1 to fire, no influence and an effect that only really needs 1 or 2 counters to get off its an easy splash.

(The Universe of Tomorrow era)
Waltzard 369
This is most often Weyland's trap of choice, since they have no in-faction advanceable traps, but they clearly have the glacier setups to WANT to bait runners into an expensively useless run. Along with Taurus, this is the most common way of dealing with Plascrete Carapace to enable Scorched Earth kills. — Bigguyforyou518 17 Oct 2015
1 or 2 counters is right, since 3 always raises the question of why you're not shooting for the Junebug flatline. It also means IAA on it is a nasty proposition for the Runner to check out, at pretty minimal investment to add some uncertainty to what your IAAs are. — LordRandomness 27 Jan 2016
2

Welcome to the new autoinclude now that SIFR will be in the new Meta and all over the place. You better find a spot for this 3 times in your deck in 2017 forward until we have another hard counter. And you better advance it at least 2 times so you can deal with one sacrifical construct that protects SIFR.

(Martial Law era)
Lancezh 16
What's SIFR? — Shieldwall 3 Jan 2017
@Shieldwall : An upcoming Anarch console that has been spoiled today. — Lupus Yonderboi 3 Jan 2017
Note that Sacrificial Construct isn't hardware and a second advance wouldn't help even if it was. (For the same reason that Fall Guy works against All-Seeing I.) — Toper 3 Jan 2017
SIFR - the death of Netrunner as we know it. — LynxMegaCorp 4 Jan 2017
AHHHHH THE END OF THE WORLD NOOOOOOOOOO — AkAnderson 24 Jan 2017