Run HQ or R&D. During that run, you may pay 0credit to trash any card you are accessing (even if it has no trash cost).

You ever set something on fire just to watch it burn?
Anarch • Anna Ignatieva • Core Set 3
All sets:
Links: Decklists | ANCUR 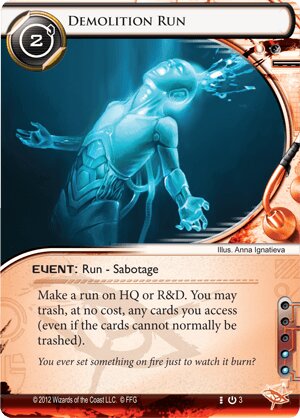 (Order and Chaos era)
Ber 2529
**Cons**: Can be use to trash Upgrades on Central most notably Crisium Grid which doesn't affect Demolition Run. — Exo 23 Feb 2015
Wow, amazing, added to the Pros section. I played the heck out of this back in 2013, but I never got to do this, I guess that is because accessing upgrades in central servers was a lot rarer back then. — Ber 23 Feb 2015
4

This card has been severely nerfed since the Core Set due to one card's notable absence: Medium.

Without an in-faction multi-access (installed) card, Demolition Run only has one friend left: HQ Interface. Given that HQI is out-of-faction and doesn't quite offer the firepower that Medium once did, Demolition Run will see much less play than it did in the Original Core Set.

Still, HQI + Demo Run offers an interesting silver bullet for corp players that have operation-critical win conditions. I've never had so much fun than using the combo to pluck out 2 Biotic Labors from the corp's hand. Without HQI though, the card becomes little more than a one-time Imp.

Overall, a decent card when paired but the influence can get pricey as both cards run at 2 influence each. If you're spending 4 influence using the combo in Shaper, make sure it's because your meta asks for it.

(Crimson Dust era)
BlackCherries 311
The Gauntlet would be good too. — quailman2101 14 Nov 2017
Demo Run could work alright with the spoiled eXer coming in the Kitara cycle. — umbralAeronaut 14 Nov 2017
Yup, both options look great. I just wanted to clarify that this was a Revised Core Set-only perspective :) — BlackCherries 16 Nov 2017
Does The Turning Wheel not work as multi access here? — zmb 15 Mar 2018
It does, outside of the core of course. — BlackCherries 15 Mar 2018
3

Demolition Run saw some heavy use early on with deep Medium digs, to see even more cards. A Demo Run plus several Medium counters would allow you to see twice the number of cards you would have seen with only 2 regular medium runs. Timing it was a problem around purges as was being able to make enough money to get through the ICE. It was also the one of the first of the Run - Sabotage types, along with Account Siphon. Now that set includes the Cutlery brand and the dangerous Wanton Destruction. Without multi-access cards such as the Interfaces and viruses like Medium and Nerve Agent, Demo Run falls rather flat on its face, being no better than an Imp counter.

Could Demo Run make a come back with more design influence for Sabotage runs? Imagine if you will a card that doubles the effectiveness of Run - Sabotage. Of course, then Account Siphon is even more powerful. Such a design space interaction would have to be carefully considered because of that interaction.

Currently, unless one is heavily relying on multi-access, Demo Run is better replaced in most decks with other cards that aid in digging. Wanton Destruction can do the same thing (on HQ) without any other cards to help it (though cards like Amped Up and Stim Dealer can clearly make Wanton more effective, it doesn’t need them) Showing Off even works instead, with the same amount of required helper cards, with the added benefit of being useful against Daily Business Show agenda hiding.

And that is where Demo Run’s problem comes in. Without additional card support it is a dead sort of card in your hand until such things are set up, and that just means its taking up space. Getting rid of one card at a time isn’t worth it unless you can do it reliably over multiple turns of the games (ie: Noise) or it gives some other benefit. At this current design state of the game, Demo Run still remains a secondary card that can easily end up as the 46th card in a runner deck, ready to be cut.

However, with newer cards like Crisium Grid and even for some uses against dreaded heavily upgraded centrals, it could find some use. You do access all the upgrades, so in specific cases, Demo Run without multi-access can be useful. However, in a deck building for consistency you never want to rely on the ‘specialized cases’ - especially ones where there are other, more efficient ways to do it.

(The Valley era)
lynkfox 358
Read carefully previous review. You think backwards - it does not need support from multiaccess, it IS the support. Sometimes multiaccess happens on it's own - this is an insane card against upgrades in asset heavy decks. Remember, not all cards are designed to work on their own - examples include Accelerated Diagonstics, Feint, e3 Filter, Grail ICE, Switchblade, Djinn and many, many more. — quiciuq 16 Apr 2015
Support goes both ways, although I do agree that this is more "support for multiaccess you should already want" than "card that should cause you to put multiaccess in." That said, remember, it can only run HQ or R&D--so it only benefits from "accidental" multiaccess if they have upgrades on one of those two servers (and it can be really messed with by Caprice Nisei or Ash). It's great against a Heinlein Grid, though, since you no longer need money to trash. — Comfect 18 Apr 2015
@quicuiq - you may notice in the very last paragraph I did mention that - Against dreaded heavily upgraded centrals (implying Crysium Grid+Ash+Caprice or some other crazy 'you can't access RD! combination) it can have a very useful effect. -- But also that means that it a) is filling a niche without further multi access support, a niche that is not a very common situation against all corp and b) taking up valuable card slots for a single thing that could be done with other cards that would be useful in more than just that single situation. If you are worried about multiple upgrades in a single server, cards like Unregistered S&W '35 become more valuable than Demo Run (at the cost of Influence, of course) because they are at least useful outside of just the centrals. Demo Run has a use for what you speak off, certainly, but demo run can be done better with other cards if you are not packing multi access. — lynkfox 20 Apr 2015
That all being said - You are correct! There is no reason to completely disregard a card because you are not packing another type. It can have a use, and if you (or anyone else) get good mileage out of it in your decks, then do so! That is how new strategies are born, that is how new interactions are found, and that is how the meta is advanced! — lynkfox 20 Apr 2015
0

What's the opposite of netdecking? Bad decking. Demo run is the bad deck king. Demo run is best used for style points and to see if you really can win the game in one turn. With +click cards and +access if you can hit R&D every click with a demo run or two in hand you either win the game or cripple the corp via mass trashing critical corp cards. Of course, while you're assembling your big run the corp can win the game playing like a normal person, potentially twice. Trashing 10+ cards off R&D is really funny though. Binning the HQ can also produce a few giggles but it isn't a crowd pleaser like dumping R&D where it belongs.