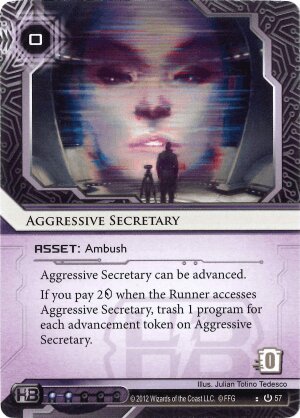 Aggressive Secretary can be advanced.

Illustrated by Julian Totino Tedesco
Decklists with this card

Jinteki may have been the trap king of the core set box, but Aggressive Secretary has still been a useful card for many decks. It may not be as scary as it’s brain damage cousin, Cerebral Overwriter, but it is perhaps a little more powerful. Trashing installed programs without ICE is a rare effect, one the runner has little way to protect themselves from. Destroyer ICE, that is ICE with the Destroyer keyword that most often has a trash program subroutine, are almost always Sentries. While a few exceptions exist, it is very safe for a runner to find their sentry breaker if they are worried about losing an important program, or put down a Sharpshooter to protect themselves.

Aggressive Secretary takes that protection away. Only Sacrificial Construct can give a shield sort of effect, and only once. AggSec is very often placed to open up a scoring window. Not only does the runner have to run it - possibly through layers of ice they paid to get through, but losing a key breaker can keep them out. With a fracter gone from the table, those end the run barrier ice are suddenly much more imposing again. Even if it is only for a turn or two until the runner can get a fracter back out, it is still a window to score. As one of the few advanceable traps, it is well used even without the program destruction, even if it just is for causing the runner to use up their credits to get in.

Still, it is not that easy. Shaper in particular, but imported to other runners, have a large amount of recursion in their decks. Bringing programs back from the heap is very easy to do, and often can be done on the fly. There is no scoring window if the runner just uses a Clone Chip to bring their icebreaker back.

There is a bit of a light for AggSec however. Cards like Scheherazade, Leprechaun, and other Daemons are a great target for AggSec, usually destroying two or three programs at the same time and leaving the runner without a vital piece of their rig. Programs always need to be trashed, if just to set the runner back a few clicks, and AggSec will always be an option for that.

(The Valley era)
lynkfox 381
Once Blacklist works its way into decks those these two cards will become best of friends; a program gets trashed and can't be pulled back - causes a lot of problems for shapers running 1 offs. — Cliquil 22 Apr 2015
1

Aggresive Secretary pair well with Blacklist (program cannot be brought back) and Ark Lockdown (program are taken out of the game). If you like, you can also pair it with Hangeki, to pressure the runner into taken the trap, else they take a negative point agenda.

Simulchip (the descendant of Clone Chip) will protect the runner from Aggressive Secretary. Heap breakers will not care too much about it.

Where Project Junebug and Cerebral Overwriter aim to damage the runner and set them up for kill, Aggressive Secretary aim to disrupt the runner. Either it will cost credits (to reinstall program) and tempo (finding that program) or making runs more difficult (not having the breaker mean taking the penalties of the subs). In this, it can be compared to Neurostasis.

Of note, you can use Back Channel to get 3 creds per advancement token on Aggressive Secretary. So, if the runner does not run it, you can make a nice amount of creds. But it is inefficient (just slightly better than clicking for credits).

Every faction have disruption traps. Jinteki has Neurostasis, Weyland as False Flag and NBN as Ghost Branch. Aggressive Secretary is the weakess of all of them, since it is specialized. Early, when there is no program on the board, it does nothing. This is why there is not much reason to include this trap in deck from other factions.

Even for the rig shooter archetype, which aim to lock the runner from running by trashing their breakers (or at least, disrupt the runner), you will be better off using cards like Keegan Lane, Trojan Horse or Marcus Batty.

The art is nice and evocative, even if I would have prefered a Bioroid themed secretary. Suggested quote : "I'll be confiscating that, thank you".