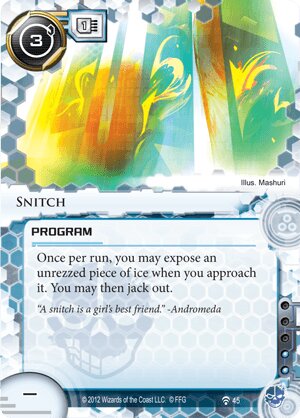 Once per run, you may expose an unrezzed piece of ice when you approach it. You may then jack out.

"A snitch is a girl's best friend." -Andromeda
Illustrated by Mashuri
Decklists with this card

It's interesting, really, that this card is so often ignored, especially with (written during Breaker Bay) the prevalence of Replicating Perfection on the world scene.

Expose is an often underrated mechanic - this of course makes face-checking ICE far safer, and makes things like Self-modifying Code and Clone Chip a bit more interesting during the run. Expose, though, isn't the real reason to use this card.

In the normal turn order, you can't jack out on the first piece of ICE in a server. This card allows you to do just that, to spend a click to see what's there and then leave before it has an opportunity to affect you. Against RP decks, this doesn't save the click for the required run, but does save the cash necessary to interact with that first piece of ICE on the central server you've chosen to attack before turning your attention to more choice targets.

It turbocharges Au Revoir, allowing a runner with a surefit of MU to pull up to three credits for bothering to look at a piece of ICE, making it an interesting potential economic engine.

Most importantly, though, it introduces options - letting you make decisions with fewer corp secrets. Its affect on the game is subtle, and, when used well, can offer interesting synergies, especially in decks where Self-modifying Code is a high influence cost.

(Chrome City era)
Shannon.L 114
You can look at Savoir-faire as the opposite of this card in terms of safely dealing with unrezzed ICE. Where Snitch lets you leave in peace, Savoir-faire lets you install the program you need from your hand without spending the click beforehand. — FarCryFromHuman 29 May 2015
When it came out, all the really scary ice were sentries, so the common (& correct) argument was you were always better off installing a killer instead of this. How times have changed! With Grail and friends, any ice type can really hurt. Definitely worth re-evaluating this card. — Ber 30 May 2015
It's crazy that this can be used once per run. It seems to me it should be once per turn. — quailman2101 13 Jun 2016
The fact that the corp doesn't have the opportunity to rez the ICE is what makes the snitch/au revoir/turning wheel combo so broken. — quailman2101 3 Aug 2016