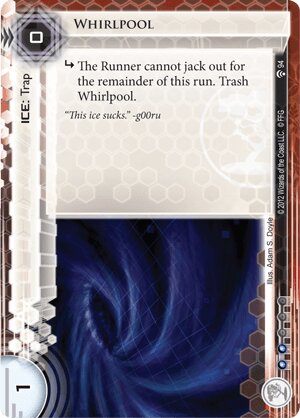 subroutine The Runner cannot jack out for the remainder of this run. Trash Whirlpool.

"This ice sucks." -g00ru
Illustrated by Adam S. Doyle
Decklists with this card

Positional (ish) ICE that is really the key to any ICE Kill server style deck. Not that those decks are very effective, or even have a winning percentage, but if the concept is going to be explored, Whirlpool is the key to doing so. As a Trap it is far more likely to fire, as long as those pesky AI breakers aren’t in position to break it. It really needs to be on the outermost bit of the server, and it would need a lot of combination with other pieces of ICE set up in just the right places, some cost reduction for rezzing those ICE, and a way to get the runner to run on it when the corp is ready for them. So many moving pieces make it difficult to pull off.

Whirlpool could be used in combination with traps of course, forcing the runner down a server they don’t want to be going down. End the Run would have to be non existent then; the runner could just let that subroutine fire when they want to get out. That in turn reduces the ability for ICE in general to keep the runner out, which is a bad proposition for most corp strategies. It could make an interesting surprise, a one off in a deck that makes the runner pause and think, step back, have to really consider what is going on down there, but it would only work once, and deckslots are allways tight.

(The Underway era)
lynkfox 365
If you're running Whirlpool, seriously consider Himitsu-Bako, as it's a cheap end-the-run that you can pull back when you want them to get through. — EnderA 20 Jul 2015
This card works super well with Howler. You can force them to run into a Janus for 1 credit! But you do need to get them both set up and have a nice Bioroid in hand or archives. And they have to not be running Faust, which they will be. Stupid Faust. — quailman2101 2 Mar 2016