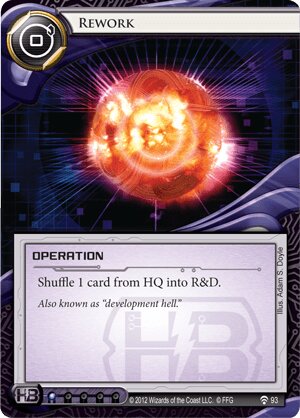 Shuffle 1 card from HQ into R&D.

Disclaimer: I only play Netrunner casually, so I can only speak from a casual player's point of view.

This card's main purpose is to protect agendas (particularly in glacier decks using 5/3s) that you are not yet ready to score. It also becomes more useful in decks with low agenda density (again, decks using a lot of 5/3s); in a 7- or 8-agenda deck, shuffling agendas from HQ to R&D can make them harder to find for the runner. When Jackson Howard came out, some people referred to JH as offering a way to "super rework" an agenda-flooded hand. Isn't Jackson Howard just a better card that does the same thing in most instances? The two cards have a few notable differences:

1) Rework generally takes less clicks than Jackson Howard to do its work. Players using Jackson will typically install Jackson and use his ability once or twice in order to overfill HQ. Hence, it takes JH 2 to 3 clicks to shuffle in an agenda. because it does not require you to overdraw, Rework only takes one click, giving you more time to do things with the other two clicks in your turn.

2) As an operation, Rework is more difficult to trash from HQ and R&D than Jackson, particularly when the Runner is Whizzard or has a Scrubber or Paricia in play (which are not too uncommon nowadays). However, Rework being an operation also means you have to hold Rework in your hand if you want to reserve it for the future, and it doesn't take advantage of the abilities of HB:ETF, NEH, Gagarin, and so on.

3) Rework costs one less influence than Jackson in HB.

4) It's good to remember that you can actually use both cards in the same deck. 2 JHs and a one-of Rework allows you to save influence, with the Rework functioning as a 3rd Jackson that can be recycled (using Jackson). It does makes you a bit weaker to Noise: Hacker Extraordinaire and other milling strategies though. 3 JHs and one rework could be good in some glacier decks, giving you even more HQ control.

5) Rework allows you to shuffle agendas from HQ into R&D even if there is a Hades Shard on the table. If the runner has a Utopia Shard installed, Rework telegraphs your intentions less.

All this said, Rework doesn't do the other things that Jackson does (draw cards, protect agendas in Archives, recycle useful cards). Jackson is obviously the far superior card, but using JH and Rework together could be interesting.