Whenever you pass a piece of ice, you may trash Copycat. If you do, choose another rezzed copy of that piece of ice protecting any server. The run continues as if you had just passed the chosen piece of ice (you are now running from the new position).

The copycat function should be used with extreme caution, or you might end up on the wrong side of cyberspace.
Criminal • Gong Studios • Second Thoughts 25
All sets:
Links: Decklists | ANCUR 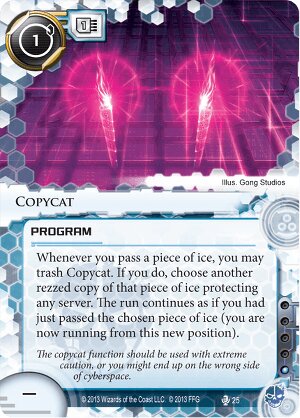 So first off, I just have to say, I love this card. It is one of the most hackery-feeling cards in the whole game, exploiting a weakness in the corp's ice structure that they probably didn't even realize they had. (Particularly because no one ever seems to remember that this card even exists or what it does - every time it hits the table in a tournament, people ask to read it.)

So first off the basics:

So why isn't it used more? While it has the potential to be really strong, it can seem inconsistent, and difficult to use. No one wants a dead card just because the corp set up their ice wrong.

So how do you actually use it well, and change it from "janky nonsense" into something that you can actually count on?

I'd like to introduce you to my two friends: Escher, and Rielle "Kit" Peddler: Transhuman.

Kit Pedler means that you have early aggression in spades, with her ability to run in near-complete safety, with nothing more than a decoder. And early aggression means that by the time late-game rolls around, you should have forced them to rez the bulk of their ice - at least 2 ice per server.

Escher is where the fun really starts. It's already a great card for Kit - With so much ability to pressure the corp into rezzing ice, she's going to have a lot of information to make informed decisions, when deciding what to put where. And with her ability so dependent on ice position, just swapping the order of ice on a server can make it significantly cheaper for her to get in.

But once you throw copycat into the mix, it gets downright silly. It means that once per game, you can have a power turn where, no matter how much ice they've put on a remote, you can get in, usually for the cost of getting into HQ, plus some change.

When so much of netrunner depends on finding ways to throw off the other player's estimation of your capabilities, it's astonishing to me that this card doesn't see more play. It doesn't fit into every deck, but for the ones where it does, this is a card that wins games.

(Breaker Bay era)
Bwob 437
Did u mentioned off the grid? :D — SlayerCNV 27 Apr 2015
Is it true that Copycat beats Caprice, even if she is rezzed? — hi_impact 1 Jul 2015
Yes, Copycat beats Caprice. http://ancur.wikia.com/wiki/Copycat This is because you never actually pass the last piece of ice protecting the server, you just continue the run as if you had passed that ice; Caprices trigger just never happens! — Quarg 4 Feb 2016