Whenever you make a successful run on Archives, instead of accessing cards you may choose 1 faceup card from Archives and add it to the top of R&D.

"Why is data deleted? Maybe they don't want it to be found. Or maybe it's just useless. The useless data is the kind you want." -The Professor
Shaper • Lucas Durham • Second Thoughts 28
All sets:
Links: Decklists | ANCUR 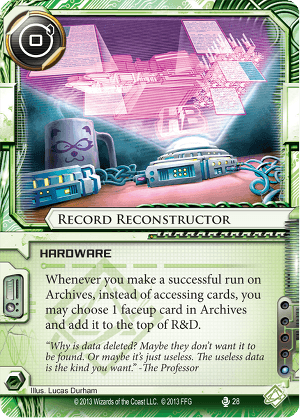 After this break, game resumes.

But meanwhile you have shaped the perfect hand, you have 40 credits and 40 virus tokens on Datasucker. You're ready to win.

If Corp purges virus counters, head for another 10 turns :) Stalemate. Force the draw in a tournament if you're in a bad situation.

(The Source era)
Him 269
Do they stack? Triple RR from replicator can lock corp pretty hard, until you have a fully functioning rig and tons of credits — KawaiiSocks 1 Apr 2015
This only works if there are 4 face-up cards in Archives. Given that the corp discards face-down, you'll need to regularly spend clicks accessing to turn cards face-up, which breaks the lock. Also only works if they don't have enough ICE in hand to protect archives. — ouroborosglyx 28 Apr 2015
Pa — Him 23 Aug 2015
They can't stack cause they replace an on access effect (like security testing) rather than enhancing an on access effect (like HQI). — Manjusri 24 Nov 2015
This card now combos with [RNG Key](/en/card/21029). Still not the most efficient way to make money, but it could theoretically slow down the Corp 0.o — Xh4rx4d 1 Mar 2018
4

I think now it's useful when you want to hostage some of the corp executive, like Chairman Hiro or Director Haas etc., returning them from archives and then trashing (and adding to the score area) from RnD.

(The Source era)
pinksky 6
This is certainly true. And if, someday, we start to see a lot of decks running the executives, and something like Self-Destruct to take them out, it might be worthwhile. And occasionally, you can pull off a S&W combo to put an exec on top of R&D. But really, that's so very conditional that it's not a great play. Now once a version of Oracle May that refers to corp decks comes out, then we'll talk. — Wookiee 30 Mar 2015
3

you realize that if there are no cards in Archives, you cannot put anything on top of R&D. This means RR has little use early in the game. Even if you do use it, you're probably going to be giving the Corp back Operations, which will only help them.

Beh with yog is strong. Oh so u trashed enigma cuz was useless?? Kk, just run r&d until you will find nothing useful and then add enigma on top. It will permit you to gain datasucker tokens and credits from desperado. Always a good thing.

(Order and Chaos era)
SlayerCNV 249
I'm really struggling to find a reason to put a card in my deck designed to give trashed cards back to the Corp. — KitsuAeryn 30 Mar 2015
We all are, lol! — robofrogg 30 Mar 2015
Clearly an anti-archives trigger card (not that its effective). Now, if it read 'Whenever you make a successful run on Archives, before access, you may choose 1 faceup card from Archives and add it to the top of R&D.' then maybe. MAYBE. Would make IG hurt a little less at least. — LynxMegaCorp 30 Mar 2015
Honestly waiting for an Anarch or Crim card that will punish Corps for using transactions for the first time. If that's the case, then put Record Reconstructor and make them pray. — mecha-nico 31 Mar 2015
I have found putting one of these into some Anarch decks is nice for removing a Cyberdex from Archives. An early Cyberdex against Noise is brutal. — Venuil 28 Nov 2017