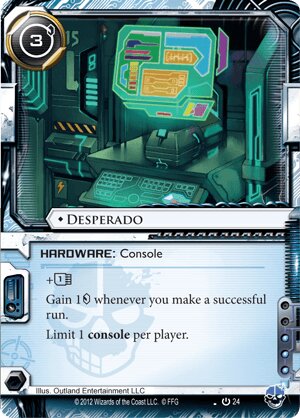 Gain 1credit whenever you make a successful run.

Illustrated by Outland Entertainment LLC
Decklists with this card

This is quite easily the best console in the game. It's sheer utility and hefty returns make buying that third core set an absolute necessity for top tier players who are using it.

Of all the factions, Criminal has the most interesting and unique consoles. Doppelgänger laughs in the face of Jinteki: Replicating Perfection, and makes for a decent Notoriety/Quest Completed deck. Logos can drastically change the game, and synergizes quite nicely with Leela's ability. Box-E not only gives you extra memory, but it'll mess with the Corp's math for scorching. And then there's Blackguard. Such a useful console if you can shell out the money for it.

There's only one problem with these consoles: you have to build your deck around them. Or in the case of Box-E, there has to be a good reason you aren't playing Desperado. This card you can slip into any deck, in or out of faction, and more often than not, it'll be a good fit. Personally, I've only really played it in my competitive Andy deck, but I've seen it pretty much everywhere. That's 6 to 9 influence people are spending on card, and with good reason. At 3 to install, the returns are always at least double the cost, if not more. Plus, just having that extra, click-free credit to spend during access is ridiculous useful for when you need to make runs early. The Corp may think you can't get into their remote and steal the game-winning NAPD Contract, but then you break through every thing, and go from 3 to 4 credits to secure the win.

Any other criminal console is going to telegraph your gameplan, which might seem insignificant, but can affect the Corp's early game decisions; for instance, if I see a Doppelgänger hit the table, I'm going to be putting a taxing ice on archives as soon as I can. But all you can tell from a player using Desperado is that they want to win.

(Order and Chaos era)
Shishu 496
I do love some Desperado, but it isn't a sure inclusion for every deck strategy. Some decks do not need to run several times a turn, and while this gets paid off quickly, other consoles like Grimoire or Toolbox could fit the overall plan better. But on the whole, good review! — Steamwood 19 Feb 2015
14

Generally I'm a fan of anything that rewards you for doing what you're going to do anyway. Desperado is king of this idea, along with Engineering the Future. You're a runner. You're going to run. And hopefully you're going to run successfully. Any time you do, you're rewarded for it. It's not a huge reward, but it's 1c on top of whatever you were already going to do.

My biggest annoyance with Desperado is that it's so useful that every other criminal console basically has to answer the question "Why are you choosing this over Desperado"?

At 3 influence, it can be painful to splash in to other factions. But for a criminal runner, unless you have a focused plan that requires a different console, it's hard not to add in Desperado.

"Pfft, 1. What can you do with 1? I guess I'll put it down, if it comes up. Now, where did I put that Aurora..." Was my (and the people I suckered into playing with me's) first reaction to this card. Don't be me (or them (but mostly me)). Keep in mind the following:

All of these things together add up to a console that will support you reliably however you decide to play. That's why its so good. It's only downside is blandness. There are so many inventive and potentially nifty things you could be doing, but instead you're getting money for running. "Well done, you." I end up thinking to myself, and feeling slightly dissapointed.

(The Liberated Mind era)
Tirranek 605
Well said! I agree that Desperado feels bland. There's plenty of room for some flavor text on this card, why there isn't any? — H0tl1ne 16 Jun 2016
10

I have absolutely no idea why anyone would ever use this card. Most corps have ice in their decks, ice such as Wall of Static or Guard. You will need to pay to break this ice if you are going to make a successful run. So as the game goes on, you need to pay increasingly more money to get 1, which is literally the lowest positive integer in existence. Not to mention the click and 3 it cost you to put this card on the table in the first place. Compare to a Sure Gamble, which lets you instantly click for 4.

This card is a big trap for beginner players who like cool pictures of computer displays and the color blue.

(The Underway era)
ZenCadenza 97
Anyone reading these troll reviews, please upvote the other, genuine reviews for these cards, to help bury the troll reviews. — Ber 29 Jul 2015
@Ber "troll review" is a bit of a stretch - it's called a joke — oldman 16 Sep 2016
Upvoted, great review. — NoSoup4you 7 Nov 2016