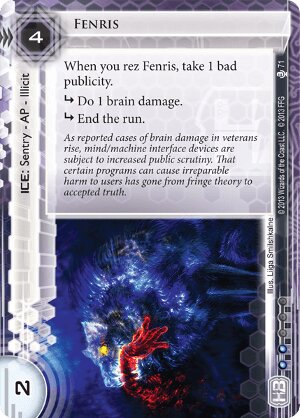 When you rez this ice, take 1 bad publicity.

As reported cases of brain damage in veterans rise, mind/machine interface devices are subject to increased public scrutiny. That certain programs can cause irreparable harm to users has gone from fringe theory to accepted truth.
Illustrated by Liiga Smilshkalne
Decklists with this card

This is one of those cards that just never seems to fire the way you want unless you build for it. While 4 credits and a bad pub are a pretty small cost for a brain damage and a end the run, most runners don't run without some sentry protection unless they think they can live with the consequence. And as bad as sentry breakers are, even Pipeline, the gold standard of crappy Killers, waltzes past this thing for 4 Credits after install. Mimic takes 2 credits each run and one of those is bad pub.

So you build for it... IT Department or Corporate Troubleshooter... both in HB. Or Grim to kill the mimic, if you just want fear to be the issue and don't care about the bad pub.

But now you are focusing around this one card and hoping that it shows up early so that the gear check is enough to buy you time, cause once they have a rig, they will get waltzing in to get your agendas. And the one brain damage you land likely isn't enough to gets you the solid lead you needed. Of course, you could tech further to add more brain damage -- Defective Brainchips for example. So ask yourself, "Can I get better results without the Illicit?"

If you want something to make a simple gear check that might stab a runner, this gets about the same done as Rototurret. "Yes, you have a Killer. Thanks." So unless you need the brain damage more than the end the run, you have other options. You actually want to try to land more than one brain damage? Sorry, you're going to have to pay for Heimdall 2.0 or Janus 1.0.

(Data and Destiny era)
Goldstep 95
Rototurret is just too weak to parasite, and it's more of a nuisance to rez on facecheck. If you hit the runner with a fenris, all unrezzed ice is fenris until the runner has a solution. HB really wants a good bad pub remover, fenris is decently taxing without the bad pub, and it's a good batty target if you're trying to cripple the runner in the brain department — cmcadvanced 11 Dec 2015