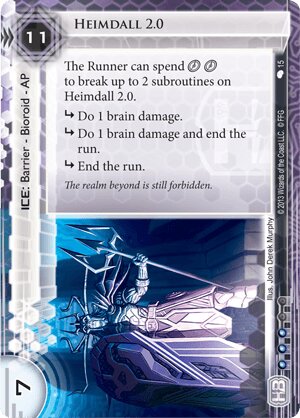 subroutine Do 1 brain damage and end the run.

The realm beyond is still forbidden.
Illustrated by John Derek Murphy
Decklists with this card

Stronger than your average Bioroid

Compared to Heimdall 1.0, the extra 3 to rez Heimdall 2.0 gets you one extra strength, an extra brain damage added to one of the "end the run" s and Heimdall 2.0 can only have two out of 3 of it's 's. The runner has less options for breaking since it must always use instead of a single like most Bioroid ice including Heimdall 1.0. Eliza's Toybox,

Install for free: Because of the high cost of Heimdall 2.0, other supporting cards that allow it to be installed for free (albiet often with conditions) make it much more attainable (in order of least to most difficult strings attached): Priority Requisition, Shoot the Moon, Mutate, Bioroid Efficiency Research, Oversight AI, Howler, & finally Awakening Center.

Make some money: Blue Sun: Powering the Future can transform Heimdall 2.0 into a financial combo when used with some of the free-to-rez cards above

Very difficult for the runner to break all three s

Strength of 7 makes it very expensive to break subroutine. Got a Parasite? Probably have a bit of time

It's two "end the run" are most vulnerable to be broken

Unless this card is getting installed with a combo or the deck has some stellar economy, this card will probably be looked over. At three influence cost it's also much less likely to show up in other corp decks. Even the Blue Sun: Powering the Future economy combo probably is better paired with Janus 1.0 for the same influence cost but netting 15 rather than the 11 with Heimdall 2.0

(Data and Destiny era)
chris_walker 663
Ice isn't "in a server", so the runner can't shoot this with Unregistered S&W '35. — Jeffrey Bosboom 25 Nov 2015
Didn't even mention the great synergy with Bioroid Efficiency Research. Please don't post reviews if you are going to spread misinformation and not even mention key interactions. — LynxMegaCorp 26 Nov 2015
What is the misinformation? Ice is in a server it's totally target-able by Unregistered S&W if it is a Bioroid. I can add Bioroid Efficiency Research, not a problem. — chris_walker 26 Nov 2015
Rulebook, page 18: "Installed ice is not in a server and is never accessed." — RS14 26 Nov 2015
Thanks, I've removed reference to Unregistered SW — chris_walker 27 Nov 2015
Doesn't even read through comments before defending himself... Just please stop. :P — LynxMegaCorp 27 Nov 2015
I sometimes take a beating in the comments, particularly when I make mistakes. Its not fun but I really really appreciate it. I'm only doing this because no review exists for these cards, but rest assured I am committed to correcting any mistakes and adding improvements as they are addressed, my intention is to provide a resource to the community it takes a lot more time and energy to write accurate and helpful reviews which in the end is what I hope we end up with. — chris_walker 29 Nov 2015
Nice review. Thanks for the info. — amanning 6 Jul 2018