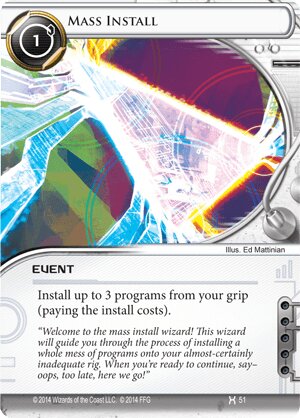 Install up to 3 programs from your grip (paying the install costs).

"Welcome to the mass install wizard! This wizard will guide you through the process of installing a whole mess of programs onto your almost-certainly inadequate rig. When you're ready to continue, say-oops, too late, here we go!"
Illustrated by Ed Mattinian
Decklists with this card

Mass install is an interesting card. The maths doesn't work in its favor like Diesel, but for 1 credit 1 card and 1 action you get a burst of 3 installs, usually taking an action each. But it requires you to have the 3 programs you want to install in hand at the same time and until then it just takes space. I think an argument can be made for this in decks that run wyldside (and with the recent release of earthrise, I don't know how many of those we will see) as it takes 4 cards out of your hand, meaning you are less likely to have to discard if you run this turn.

I mostly see this as a noise card. Noise is the id most likely to want wyldside, and he is the runner most likely to have 3 programs in hand at any given time, and the burst mill might what you want after a jackson has just been removed from the remotes, or if you already have a shard ready to go (The runner has the priority after a runner takes an action, as it is their turn, so jackson cannot be used in this scenario)

While Mass Install can provide a powerful tempo boost, it is important for all good runners to remember that this card, much like Diesel, is rarely ever worth using with the ever-popular Same Old Thing.

(The Source era)
JAK 368
'much like Diesel'? Diesel is an amazing card for Shapers. And comparing it to Same Old Thing is apples & oranges. — Trypios 1 Oct 2015
I believe that JAK is claiming that both Mass Install and Diesel make poor SoT targets, since the two clicks from SoT nullify the advantage they bring. — Vimes 11 Dec 2015