You cannot use Tri-maf Contact more than once per turn.

She slipped back onto her hopper. "I'm your family now, so don't twist me, dǒng ma?"
He flicked the e-cig away from his mouth, and nodded. What had he gotten himself into?
Criminal • Ashley Witter • Honor and Profit 50
All sets:
Links: Decklists | ANCUR 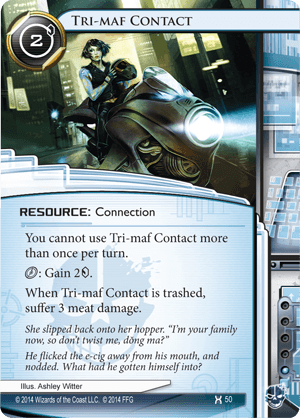 There are typically two types of criminal decks: those that can get money quickly, and those that lose. Tri-Maf Contacts plays into that mindset by being an economy card that could lose you the game.

Criminals are said to be the "economy faction", the runner faction that can turn just about anything into credits. Data Dealer, Desperado, and Bank Job all point to this. However, for quite a while, criminal economies lacked in non-running economy, having only Easy Mark in faction. Tri-Maf contacts was the first card to address this disparity, laying the groundwork for future cards.

Any discussion of an economy card has to start with math. I apologize. If you want to skim, I'll have a header at the bottom where the math stops.

When talking about economy, most people start by talking about click equivalents, and counting them as ~1 credit. This is silly, and has led to some pretty bone-headed analysis in the past. A better way to think about things is how many credits the card gives per click. Assuming runners are drawing consistently, as they should, this leaves the play cost (in credits) and the click (or two) to play. (Some may argue that one should include the click to draw, but it's good practice to draw an average of 1 card per turn. That's not a cost inherent to the card, but to the game's strategy.)

Resource economy typically involves more variation of those numbers. Daily Casts gives the most credits per click, at (8-3)/1=5 cr/cl; but the payout is over several turns. Underworld Contact typically requires at least one link card to be played, so, if installed with Access to Globalsec, the card provides (1*n-3)/2 cr/cl, where n is the number of turns elapsed. Kati Jones is complicated enough that I won't go through the math here. Daytodave has posted a review of Kati with some relevant math.

Tri-Maf, then, is fairly simple: it gives (2n-2)/(n+1) cr/cl, where n is the number of times Tri-Maf has been used. Note that, as n gets large, the value becomes nearly 2 (as we would expect). This is not as impressive as Daily Casts, but the raw credit generation is massive: while Daily Casts only gives 5, Tri-Maf gives 2n-2, which, if the game goes on longer than four turns, is greater than Daily Casts. Underworld Contact will have the same cr/cl as Easy Mark in 9 turns, as above, but Tri-Maf, in that time, can net 16 credits.

The real question is how does Tri-Maf stack up to Magnum Opus, the holy grail of economy cards. If they are clicked at the same rate, then Magnum Opus has (2*n-5)/(n+1) cr/cl--less than Tri-Maf. Unfortunately, Tri-Maf has the once-per-turn restriction, so Magnum Opus can run up its times used much faster than Tri-Maf. The question, then, is whether Magnum Opus should be used more than an average of once per turn. I can't say, but I suspect it's more like 2 times per turn--more against taxing decks.

To sum up all of the above, Tri-Maf very quickly turns a profit, at the expense of needing to spend one click per turn using it. The advantage of turning a profit quickly can't be understated--when a runner plays a Daily Casts, they're usually opening a scoring window for the corporation.

The drawback, however, is a bit spooky for most people. Meat damage has been feared since Scorched Earth. However, this card helps to protect itself. Trashing resources requires a tag, or, in the case of Foxfire, a trace. Since most tags come via traces, a healthy economy can keep Tri-Maf alive--and, hey, Tri-Maf is an economy card!

Criminals also have plenty of work-arounds, if you can't out-money the corporation. Fall Guy and Decoy both prevent the card from being trashed, and Crash Space will keep you alive if it is trashed.

The most dangerous situation a criminal might find themselves in, is spending most of their credits whiffing on a run that might have won them the game. Typically, that's a risk that one takes in a do-or-die situation, like taking your third point of brain damage with a Stimhack or trashing your rig to an Ichi 1.0. Either way, you're likely losing the game if the run doesn't pay off. These are calculated risks that Netrunner players have become accustomed to--"if I don't, he wins" situations.

In any case, the best card to compare Tri-maf Contact to is Kati Jones. Both give a good number of credits as the game goes on; and both are vulnerable to trashing when tagged. But, while Kati Jones gives you credits eventually, Tri-Maf gives you credits on demand, making it a bit more flexible. Since both have a "use once per turn" clause, they both need to be supplemented with other economy cards. And, since Tri-Maf is vulnerable when the runner is at low credits, runs that leave the runner broke should be considered Stimhack runs.

(All That Remains era)
hatman 167
Since Order & Chaos Deluxe expansion, Tri-Maf has gotten far better. Its low cost in influence means that it can easily be imported into an Anarch build, and its drawback can be mitigated by the use of 'I've Had Worse'. — Bananifier 17 Mar 2015
Extremely vulnerable to Contract Killer. One for trashing (Three MD) plus another one for 2 can end the runners game. — Handsome Jack 24 Mar 2016