Choose a server. The Corp can rez a piece of ice protecting this server. If he or she does not, make a run on that server, during which the Corp cannot rez ice. 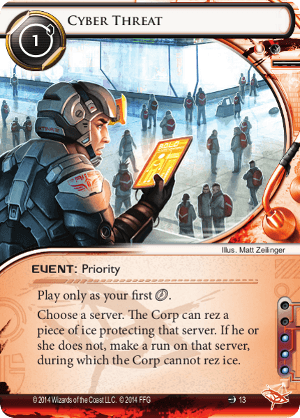 I'm surprised this card - at least from my experience - doesn't see play. Cyber Threat is great in any anarch deck attempting to bankrupt the Corp through forced ICE rezzing. For 1, you can give the Corp two pretty bad choices: Rez a piece of ICE without making the runner suffer its effects unprepared or give the runner one free access. This effect is somewhat lessened once you're staring at 2-3+ layers of ICE, but it still allows you to make a run with perfect information about the ICE you'll be facing.

The not-so-great side of Cyber Threat is when you take a shot at HQ and the Corp rezzes a Pop-up Window or similar, you've wasted a credit. This could be mitigated if you're running Reina Roja and/or have a Xanadu out, both likely options if you're going for econ denial/ICE taxing.

(Chrome City era)
psi_lifeup 199
I think it's not seeing play because most Anarchs don't actually care much about the Ice they face, or don't want it rezzed. Valencia wants it all facedown, and anybody running an Eater/Knight rig doesnt care what it is most of the time. Anarchs just facecheck a lot and while I agree that originally I was surprised it wasn't being played I think it's understandable, on reflection. — Satellite Uplink 10 Jun 2015
The problem with this card is that most of what it does can be accomplished by just running on that server first click. The only really valuable use case is if you suspect there might be some dangerous ice in a server and want to scope it out first. Otherwise, why wouldn't the Corp just rez their cheapest ice? "Rez some ice or I get in this server" is the same threat made by any normal run.. — lobotomy42 16 Jun 2015
Does this card get around RP? Either way it probably only serves a purpose in a Reina deck as mentioned, forcing either a rez or a free run unless they want to pay the increased cost. But even then the utility is limited. — Otacon 17 Aug 2015
Little late, but @Otacon: this card does not get around RP. — PaxCecilia 3 Sep 2015
RE: Roja. Pick a server and if the Corp rezzes there, pick a different server to do a run on. Even if they rezzed cheap ice, they have less to rez where you really go. — WithoutPause 3 Oct 2016
2

Think of this card as saying: "For 1, make a run. If the corp rezzes ice, immediately jack out without encountering that ice." Close enough.

It can be surprisingly useful in ice-destruction decks using the cutlery set (Knifed, Forked, Spooned) and relying on Eater.

The problem it addresses is that getting into a server often looks like this:

That's 3 and, potentially 2x the normal s to break.

Playing Cyber Threat on the same server, following the same pattern, costs you 1 and either gives you the access, or saves you the from an Eater break if the ice is dangerous. That can sometimes be the difference between getting in and not.

Ice destruction often requires forcing rezzes (especially post-MWL nerfing of Clone Chip + Parasite), and this is another way to force that to happen.

I'm surprised it's not a Run event. If it were it would be wonderful to play in Adam, and feels like it ought to combo with Public Terminal, Doppelgänger, etc.

It would actually be pretty good in Kit, because it gets around a scary situation for her: double-iced servers with the outer ice rezzed. No way she's spending 3 inf on it though.

(Data and Destiny era)
Vaslav 11
I imagine it's not a Run event because it doesn't NECESSARILY trigger a run (e.g. Adam could get out of running at all on a given turn if the corp rezzes) — LordRandomness 9 Jan 2016
I really wish this card didn't have the "only use as your first click" restriction. I don't know why it's there, but it makes the card a lot harder to use because you have to start with it in-hand. — KitsuAeryn 12 Jan 2016