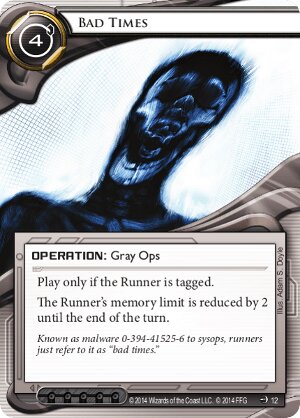 The Runner's memory limit is reduced by 2 until the end of the turn.

Known as malware 0-394-41525-6 to sysops, runners just refer to it as "bad times."
Illustrated by Adam S. Doyle
Decklists with this card

With the arrival of new tagstorm deck archetypes in Data and Destiny, perhaps there will be some new value for this potentially rig-wiping card which has not seen a lot of love since there are many cheaper and generally more effective forms of tag punishment. The current pool of operation-based tag punishment includes meat damage (Scorched Earth and Traffic Accident), monetary damage (Closed Accounts), resource removal (Freelancer) and agenda acceleration (Psychographics).

So the main question becomes, why bother with such an expensive operation to cut 2 MU of programs off the runner's table when you could be dealing 4 meat damage instead? Well, in most cases, you probably shouldn't, but there may be some situations when it's a better choice. Some pros:

(The Underway era)
beladee 18
Bad Times gets rid of cards that the runner has invested clicks and credits into and will have to spend valuable resources (like Clone Chips) to get back. That tempo hit is much more valuable than meat damage if you can't land the kill. — WayneMcPain 12 Aug 2015
We'll see less of Clone Chip now that it's on the MWL. As this was a huge part of program recursion, program trashing abilities like Bad Times will hopefully get a boost. — PureFlight 19 Jan 2016
3

As an aside, the flavor text of Bad Times is (this may be stretching it) a reference to Michael Crichton's famous techno-medical thriller The Andromeda Strain, which has an ISBN number of (wait for it...) 0-394-41525-6

I can only see this card being particularly effective if played twice in the same turn, perhaps via Archived Memories. However, the conspiracy breakers make it even less effective than it ever has been.

(Quorum era)
EnderA 493
Imagine this: You're corp, you have 8 creds and a 2 card combo in hand and the runner is tagged. And you're playing Bad Times, Archived, Bad Times? Really? What happened to good old double Scorch? :D Yes, -4 mu is devastating to a normal runner with full rig. But so are other tag punishment cards. And most of them cost waaay less. I would _maybe_ play this if it would cost 1c, but not for 4c. — Krams 22 Feb 2017
Yeah... it's really a stretch. — EnderA 24 Feb 2017
2

I wish this card had been in Mala Tempora instead. Then we wouldn't have to worry about it anymore, and we could have some nice Latin jokes.

But the fact is, here we are.

Bad Times (in Latin: mala tempora) is an overpriced, underwhelming operation that indirectly taxes the Runner by effectively taking up space on their rig. Much like the GOODTIMES virus of old, Bad Times presumably fills up as much memory as possible while emailing itself to all the Runner's friends. This squishy skull friend was obviously designed as a way for the Corp to bite back at the Runner, forcing them to discard valuable programs that took significant investment in and to install.

...or did it? The fact remains that the Runner chooses what they want to trash, and that's never a good thing for the Corp. You can bet those icebreakers giving you trouble aren't going in the bin - or absolutely are if they're the conspiracy breakers. At worst, you just sent Sahasrara, a dead Imp or Cache, maybe even Tapwrm to the bin. Runners have plenty of support programs that are easy come and easy go - a savvy Runner could even pop Self-modifying Code to free up one MU, tutoring another program along the way!

Not to mention that the cost of this tag also includes the cost of tagging the Runner, which, as has been mentioned in other reviews, has a lot of other use cases. I mean, maybe if you were going up against tag-me Alice Merchant with God of War oh wait that's an AI and one ; you're fucked.

There's so much wrong with this card. Its waaaaaaaaaay too expensive and waaaaaaaaaay too weak to be particularly effective. I mean, I get the idea of this card: tag a fool, trash programs because of it. Trashing programs is one of the corp's most impactful tricks, probably the second most after killing them. However, simply reducing the runner's MU limit isn't really the way to do that. Its pussyfooting around the issue without actually doing the deed. Had this card been a bit less expensive and just said "trash 2 programs" instead, this would've been killer, especially at 0 influence.

So what's right? Just the concept and the artwork. Maybe I'm just a sucker for this kind of art, but I think its pretty cool.