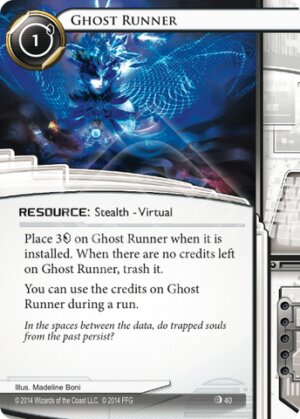 You can use the credits on Ghost Runner during a run.

In the spaces between the data, do trapped souls from the past persist?
Illustrated by Madeline Boni
Decklists with this card

A must-have card in any stealth breaker deck, turning 1 into 3 stealth credits. The credits are not locked to a specific type of breaker, like the Lockpick or Dyson Fractal Generator renewable credits are, though they do not refill each turn. They are not hardware, so no Replication Fun to pull all three out of your deck at once, and no Supplier to remove the cost.

Also, if your opponent loves bad cards, watch out for Foxfire.

Overall, a great stopgap until a stealth hardware setup is complete, and a late game power boost to get past glacier decks as well. Add 3 in every stealth deck, but it has little value outside of those.

(Chrome City era)
Steamwood 303
I don't know if I go so far as to characterise this as a must have. Certainly a stealth deck needs two out of three from the choices presented by this, the stealth chips and Cloak. It's also worth noting that this synergises surpringly well with Nasir. Although its econ neutral (if you're happy with the dubious equation that says Clicks=Cards=Creds), it's good to have some money that sticks around when you hit a newly rezzed ice. — Greasythumb 8 Jun 2015
The Supplier can do resources too, so he can save you a cred on this. — Lttlefoot 9 Jun 2015
Good for Nasir decks too, since it's zero influence and has credits outside of the credit pool. — Zakalwe 9 Apr 2016