Use this credit to pay for using fracters.

The Dyson Fractal Generator is a useless lump of silicon; all it does is produce truly random results. What kind of madman slaps that in his rig? What's the use of a totally random number? -John Masanori
Anarch • Gong Studios • Double Time 103
All sets:
Links: Decklists | ANCUR 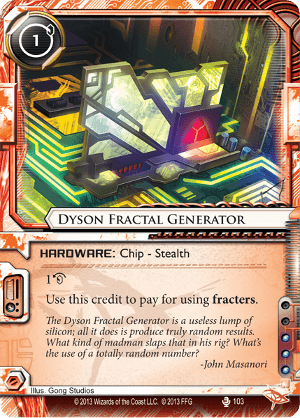 Alongside their flagship product Dyson Mem Chip, Dyson also produced a lesser-known Fractal Generator which can still be commonly found at many pawnshops servicing the hacker trade. Though famously panned by John Masanori, Dyson Fractal Generator can be a key piece of hardware for hackers who focus more on stealth to overcome barriers rather than brute-force.

Artist's Touch: Got your Fracter out, and on Dyson Fractal Generator but rezzed ice doesn't say Barrier on it? Paintbrush might be worth using a on to change the color to your liking. Tinkering is another viable alternative here.

Economy: 1 on Dyson Fractal Generator can make a significant difference turn after turn.

Stealth: While stealth-dependent ice-breakers tend to be efficient & powerful, the limited number of stealth sources make each available source an important line to consider tapping into, Dyson Fractal Generator is one of only 5 possible sources each with their own unique bent.

Cheap: At only 1 to install Dyson Fractal Generator pays for itself after being used only once. In other-wise cash-strapped Anarch decks this is certainly meaningful.

Hardware: Unlike Cloak (a program) or Ghost Runner (a resource), as hardware, Dyson Fractal Generator is much safer from being trashed and doesn't use any

Limited: Like Silencer and Lockpick, Dyson Fractal Generator can only be used in combination with a smaller subset of ice-breakers

Costly Influence: at 3 influence cost this chip can be very difficult to splash outside of Anarch, particularly if also combined with BlacKat.

Similar to Dyson Mem Chip, backed up by the Dyson name, Dyson Fractal Generator is dependable, it gets the job done most importantly by further adding to a stealth-based economy. Sadly influence cost for stealth-based decks means compromises must be made in other areas to compensate, ultimately giving a touch of truth to John Masanori's attempted misdirect.

(Data and Destiny era)
chris_walker 610
A quick note: It's probably obvious to most, but you do not NEED to use a stealth breaker to use any of the stealth credits. This (and the other stealth options for their respective types) can be used on any fractor. — Sabin76 7 Jan 2016
Thanks Sabin76, is there somewhere in this review that gives the opposite impression? I thought the Credit for Fracters section kind of already established that pretty clearly, but I'm willing to clarify further as needed. — chris_walker 7 Jan 2016
Nice review, I hope to see more :) I think the biggest problem with this card is that the only stealth fracter, Blackat, is just not good compared to the in-faction Corroder. — Ber 17 Jan 2016
I agree, still Dyson Fractal Generator can be used for Corroder as well! — chris_walker 21 Feb 2016