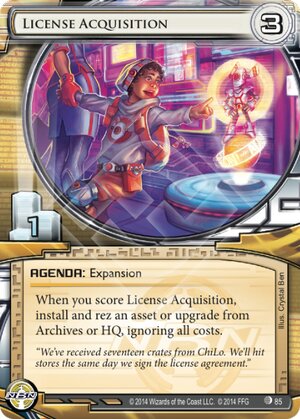 When you score this agenda, you may reveal 1 asset or upgrade in HQ or Archives. Install and rez that card, ignoring all costs.

The obvious place to try this is in NEH Astrobiotics, where it can rez a SanSan City Grid for free. You could switch the 2x Breaking News for two of these. I think it will end up being worse; the ability to just score a 2/1 with no fast-advance resources is strong. And it's not clear when scoring a License Acquisition is good. Late game you probably don't need another SanSan, and early game you would rather just score an Astro.

Since a few years have passed since this card was last reviewed, and I have never done a review before on this site, I'm going to put in my amateur 2 cents.

The highlights of this card are obvious: Asset/Upgrade freebies. It's primary purpose would be to pop out a SanSan without the hit to the credit pool, but in reality, this card can be used to bring out anything, for the same reason. Obviously, the bigger the card, the better your value out of it.

The downsides: The card must be rezzed, meaning unless you were planning on showing off your Snare or News Team, or whatever Ambush you planned, you're probably not gonna get much play out of it. (Writer's Aside: Protecting an Expo Grid with a News Team, or similar Painful Access is hilarious.)

Here's the real gold nugget though: ...an asset or upgrade from Archives...

The big rub to all this though is that it's a 3/1. Not terrible, but also sort of awkward. As implied by a "License Acquisition" this card wants a plan. It wants a combo. You don't throw this out to score it. This is a card that you throw down with the future in mind. To break even, you need something worth more than a full turn spent just to install and rez something.

Now, if this card were an operation, or any other kind of card, it would be an auto-include, I feel, but because it's an Agenda it's a Risk-Reward play, and there's a lot of risk in NBN as is.

License Acquisition isn't for everyone, but if you have a plan for it, I feel it can pay itself back.

(Crimson Dust era)
Drakeheart 39
I think what you really want to use is the ``ignoring all costs'' clause. Rez and install a Corporate Town, an Ibrahim Salem or an Oberth Protocol behind some taxing ice. After they trashed it, install and rez another copy, using the scored License Acquisition to do so. — tantale 27 Sep 2017