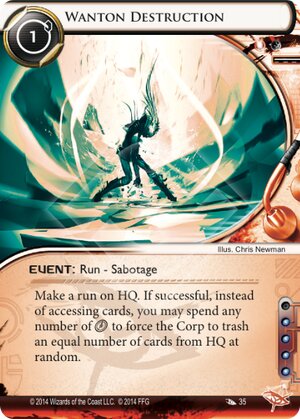 Run HQ. If successful, instead of breaching HQ, you may spend any number of click to force the Corp to trash that many cards from HQ at random.

To me, this is the most intriguing card released in Order and Chaos. The flavor is pure Anarch: screw with the corp's hand, go fetch the good stuff from the dump. #&@* you, mother#&@*er indeed.

The best comparrison card here, I believe, is Legwork. Both cards have the ability to do something to three cards in HQ, on their own. In faction, it's no contest: Anarchs should play Wanton Destruction to save influence and for the ability to synergize with other in faction cards (namely Eater). Criminals, I believe, will still want to gut punch the corp with Legwork, as well: The influence swing is again the deciding factor, and you probably have other ways you want to spend clicks on your whole turn.

In Shaper, however, and maybe just in the event-driven deck I run, it becomes more interesting. Legwork can insta-win the game for you. However, it comes with all of the downsides of multiaccess: Snare! death traps, setting up a Punitive Counterstrike, or simply hitting a hand full of ICE and Operations. Wanton Destruction doesn't care. Think your opponent is setting up the game winning SEA-Scorch-Scorch? Wanton Destruction first click GUARANTEES they won't be able to hit that combo if it's in hand already. You're still SOL against Project Atlas, though. Did you see some Biotics in hand? Wanton Destruction can mess with those plans.

It does have a bigger influence hit than Legwork, so you probably will run 1x Wanton as opposed to 2x Legwork. You can always run one of each instead of 3x Legwork, if that's your thing.