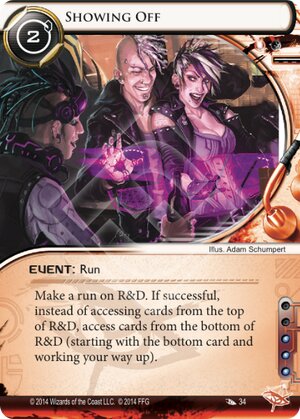 Run R&D. If successful, when you breach R&D, access cards from the bottom of R&D instead of the top.

My first instinct with this card was to think of it like Window; why would the cards on the bottom of the deck be any better than the ones on top?

But I realized this card does actually have a use (besides just superstition). This card is for those times when you want to make the most of a small window of time when you can get into R&D. Maybe your Parasite just ate a big piece of ICE, and you want to hit R&D hard before they re-ICE it. Maybe they spent too much scoring an agenda and forgot to leave enough money to rez their central server protection.

Especially with some muli-access, this can be a big deal. Say you have Medium with a counter or two, or especially R&D Interface. You run, see a few cards, but all of them are Operations and you don't have an Imp. If your multi-access is Medium, you could run again, but you'll only see one additional card. With R&D Interface, there's no point.

But now, with this card, there's suddenly a point again. Play this and see a whole new selection of cards. That's actually really powerful.

Will it see a lot of play? I kind-of doubt it. But I wouldn't call it useless.

Alot of people are saying this is just a worse version of demolition run. which at first glance it seems that way, and most of the time i might well be worse.

One of the few times i feel it might be useful is in a meta with corps using alot of Daily Business Show because most of the time the corps will be putting agendas onto the bottom till they have a window or are comfortable keeping them in HQ.

Other then that demolition run 4

Seems good against Architect, which is growing in popularity. Could give a lot of information against Daily Business Show. Like if you see that they've dumped a SEA Source, then it's likely that they have one in hand.

(The Source era)
Horse85 6
Did played a game where I managed to win with a Medium dig on a R&D protected by Architect and finishing this of with Showing Off. This is seriously a good card with more subtle purposes than it seems at first. Like you mentions, it can be very strong against Daily Business Show where the corps want to keep cards protected for later and this synergize well with its faction where you have the possibility to trash any type of cards. — Exo 19 Feb 2015
1

This is a lot better than just shuffling R&D, with multi-access.

Unlike a Keyhole-esque shuffle effect, this gives you access to X cards you haven't seen before, guaranteed. If you've seen 4 agenda-free cards in a 20 card R&D, you get access to 4 of 16 cards you've not seen before, not 4 of a random 20.

And, more importantly, either the Corp is not going to see these cards soon, or the Corp has tried to get rid of them. It's sort of a reverse R&D-lock (because, let's be clear, you're almost certainly getting them with some element of R&D lock if you're using this).

Seeing card the corp isn't going to see can be helpful. If you happen to see a Scorched Earth or other high-influence card, a la Biotic Labour, you're going to get a bit of idea about deck construction.

Obviously, the existence of Jackson Howard makes this worse, but unlike this card, Jackson won't be around forever. (And, really, who don't like the idea of killing a Jackson from the top of R&D and another from the bottom? Trashing cards from the bottom has utility, particularly if you are facing shuffle effects. )

An excellent niche card, that seems like it might be the Anarch equivalent of Escher: something to run a one-of which is of occasional, but devastating, use. (Only a bit more powerful.)

Definitely see some powerful situational plays as mentioned above. It will need to be played with some amount of planning and care to be useful, but even at it's worse you will get to see a whole new set of cards.

Has no-one thought of the Hades Fragment counter ability of this?

(The Source era)
zithith 42
Since Showing Off is a run and presumably comes as a surprise to the corp Hades Fragment will usually be used to rescue cards from Archives that the corp wants to eventually see again. This means the value of bottom access could be considered increased, rather than the opposite. — Zakalwe 25 Mar 2016
0

Echoing what Zetan said, the main purpose as I see it is to see a whole new batch of cards. It's just like accessing off the top really - except the cards are generally little more stagnate until a shuffle.

The main problem here is the 3 influence cost. This makes it prohibitive to add to any deck that isn't Anarch. Not impossible of course, but a painful inclusion. 3 Influence gets you a Gordian Blade, Security Testing, 3 copies of Cache, 3 copies of Quality Time, and a whole bunch of other things. It's also a Medium, a Mimic and Corroder, an Imp - or a whole slew of things that you probably want more. And considering it's an event, and not an triggerable hardware (see Record Reconstructor inter alia) it's not going to see as many uses.

With our good friend Jackson Howard rotating out. NBN (and possibly others) are going to want to protect their most vulnerable items from being lost in the archives. It's not at all unlikely that Miss Shannon Claire will be put up to the challenge of handling such tasks. Also she's a handy response to an Indexing, allowing the corp to shuffle away the stacked deck in a jiffy.

Sadly, by using her, the runner knows exactly where the important cards are now.

So this might seem nearly useless, but if the meta shifts towards using Shannon for Jackson-like abilities, see this as a tech card to turn to in a pinch to assure that victory.

(Crimson Dust era)
WizardRandom 1
Also Wampoa Reclamation... but the issue is that at three influence it's hard to splash. — Goldstep 20 Sep 2017