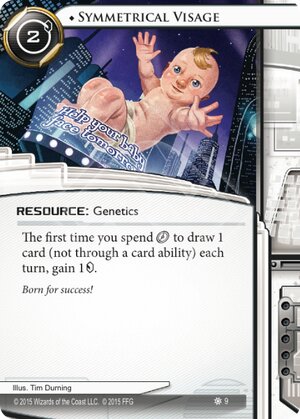 The first time you spend click to draw 1 card (not through a card ability) each turn, gain 1credit.

Born for success!
Illustrated by Tim Durning
Decklists with this card

Aside from Adjusted Chronotype, this is probably the best Genetic resources we've seen so far. In essence, this is a cheaper Professional Contacts that can only fire once per turn (or twice if you also have Gene Conditioning Shoppe): which is great, because the biggest barrier of entry for Pro Con is its high cost.

Consider: Pro Con will cost you 5 clicks before you start turning a profit, while Visage will cost you only 2 clicks before you start turning a profit. While it is true that you must spread those two clicks out over two turns, barring click gain shenanigans, it'll also take you at least two turns to click your Pro Con five times! All in all, it's a great card, and one that I'm glad they made neutral because it means that everyone gets to benefit from it.

(Order and Chaos era)
postalelf 68
We have to consider ProCon's draw as a profit, too. Sometimes considered a little more valuable than a click. ProCon could potentially draw you into that Sure Gamble or other notable econ while giving you some credits back, so in the end, you'll end up profiting a lot more over the course of those 5 clicks. — LynxMegaCorp 1 Apr 2015
@Lynx sure, but the same can be said of Chronotype (in that you're getting a draw and 1c for a click). I was comparing both of their profitability. — postalelf 2 Apr 2015
The benefit of ProCon/Visage is that it enhances whichever of the options is better with the other one. I.E. if you want cards, they give you some credits too; if you want credits, they give you some cards too. Always compare them with the best alternative. — EnderA 18 Jul 2016
2

This seems like a stellar add in a lot of decks, the ability is ubiquitously useful. I love it in Kit, especially with GCS in faction, splitting up the cost of ProCons for no more inf. Almost no deck doesn't want this effect, barring slots. It pays back click 1 and doesn't wait till next turn, I think this will see a good deal of play, especially in criminal. 4/5

All I can say is that's a pretty good card, especially if it shows early. I put one of in my deck, as I can't free more slot for it, but I wonder if more is really useful.

Professional Contacts is a heavy investment, and when you put it in your deck, you generally expect it to be a drawing and economy engine, so you it's better to put 2 or 3 of it to get it early. Symmetrical Visage can be seen more like a little help, cheap to install, so it's not a worry as a 1-of.

Not sure if it makes a real good drawing engine, though, even if a compressed click per turn is great. It may be better to put only one along with other non-stackable drawing cards, like Vigil, Earthrise Hotel, maybe Mr Li (not sure for Wyldside, certainly not with ProCon since they don't stack).

This is still a very good card. I would go as far as to say it should probably be a one of in almost every runner deck, because it's that good.

Specifically, this is one of the lowest cost ways to get more bang for your clicking buck. I mean that in every sense of the phrase. It costs no influence to put in a deck and it only costs two to throw it out, so there is not a huge tempo loss. Tempo loss is a big deal, and a major strike against a card like Professional Contacts. Not that ProCon isn't good, but it's a lot harder to build around, get out, and use than Symmetrical Visage is.

Furthermore, every deck should have some kind of engine in it and this card plays nice with basically every other engine out there.

If you already have one of these and you are sitting on 44 cards, you might even consider throwing in a second one of these so you see it earlier and more often.